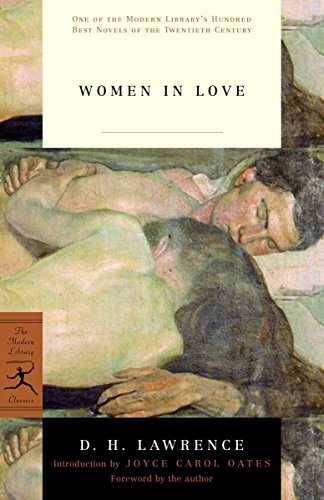 With an Introduction by Joyce Carol Oates
foreword by the author
Commentary by Carl van Doren, Rebecca West,
Aldous Huxley, and Henry Miller

It is . . . the world of the poets and the preponderance of the poet in [Lawrence] that is the key to his work. He magnified and deepened experience in the manner of a poet," wrote Anaïs Nin in 1934.
Privately printed in 1920 and published commercially in 1921, Women in Love is the novel Lawrence himself considered his masterpiece. Set in the English Midlands, the novel traces the lives of two sisters, Ursula and Gudrun, and the men with whom they fall in love. All four yearn for fufillment in their romantic lives, yet struggle in a world that is increasingly violent and destructive. Commenting on the novel, which was composed in the midst of the First World War in 1916, Lawrence wrote, "The bitterness of the war may be taken for granted in the characters." Rich in symbolism and lyrical prose, Women in Love is a complex meditation on the meaning of love in the modern world.
To the critic Alfred Kazin, "No other writer of [Lawrence's] imaginative standing has in our time written books that are so open to life."

This edition of Women in Love clears the text of literally thousands of accumulated errors allowing its readers to read and understand the novelist's work as Lawrence himself created it. The introduction gives a full history of the novel's composition, revision, publication and reception, and notes explain allusions and references.

2. Women in Love (Paperback or Softback)

Book Description Paperback. Condition: New. 2002nd. Paperback. With an Introduction by Joyce Carol Oatesforeword by the authorCommentary by Carl van Doren, Rebecca West,Aldous Huxley, and Henry MillerIt is . . . the world of the poets and the preponde.Shipping may be from multiple locations in the US or from the UK, depending on stock availability. 576 pages. 0.612. Seller Inventory # 9780375754883