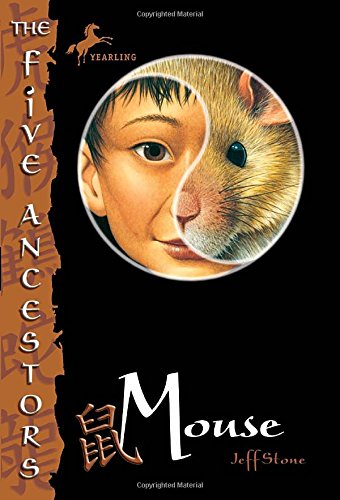 Little street urchin ShaoSu has always wanted to belong. His small size makes him an easy target for bullies and baddies and this little “mouse” always needs a place to hide. When he is befriended by Hok and Ying, he thinks he has found a new family, and eagerly tags along as they continue on their travels. What he doesn’t know is that his new friends are the most wanted criminals in China, and their adventures will land him in the middle of a battle not only for their lives, but for the future of China itself.

As the characters rush towards a dramatic conclusion to the Five Ancestors series in this, the penultimate title, Jeff Stone has again created a marvelous story, a compelling voice, and a ton of exciting action.
From the Hardcover edition.

Jeff Stone practices the martial arts daily. He has worked as a photographer, an editor, a maintenance man, a technical writer, a ballroom dance instructor, a concert promoter, and a marketing director for companies that design schools, libraries, and skateboard parks. Like the heroes of The Five Ancestors series, Mr. Stone was adopted when he was an infant. He began searching for his birthmother when he was 18; he found her 15 years later. The author lives with his wife and two children in Carmel, IN.
From the Hardcover edition.

The Chinese junk pitched and rolled in the pounding surf, its ancient timbers groaning under the heavy load. The boat lay low in the water, cold spray blowing over its rails with each gust of the frigid autumn wind. Hidden below a tattered tarpaulin on deck, ShaoShu—Little Mouse—wondered what he’d gotten himself into.

He shivered. The damp sea air had soaked through his thin skin, deep into his tiny bones. He had only been aboard one day, but he already yearned to have his feet back on dry land.

ShaoShu had little experience on the water. True, he’d just spent more than a week traveling down the Grand Canal with his new friends, Hok and Ying, but that ride was nothing like this one. That was fun. This was agonizing. The sooner he was off this ship, the better.

The boat lurched suddenly on the choppy seas, and a wicked crosswind lifted one corner of the tarp. ShaoShu quickly snatched it back down, catching a glimpse of General Tonglong’s long ponytail braid swaying just a few paces away. ShaoShu shuddered. Tonglong—the Mantis—was uncomfortably close.

As a homeless street urchin, ShaoShu had a lifetime of practice hiding in small, inconspicuous places. He had an unnatural ability to bend and twist his small body into all sorts of strange shapes, and he put these skills to use stowing away here on Tonglong’s Chinese man-o-war in order to steal some information for his new friends. This, however, had been more than he’d bargained for. Perhaps he’d pushed his luck too far.

ShaoShu shifted his position ever so slightly, and he felt the weight of the shiny cylindrical object resting on his lap. It was nothing really, some sort of spyglass. While it might prove useful to him, he had mainly taken it because it was made of a highly polished brass and glimmered with a luster he couldn’t resist. It was this same fascination with shiny objects that had brought him to his current hiding place.

With each passing wave, ShaoShu sank deeper into the largest pile of treasure he’d ever seen. He was surrounded by riches that even the Emperor would be hard-pressed to imagine: golden goblets, impossibly intricate jade figurines, mounds of pearl jewelry— all of it piled here on the boat’s deck and covered with a tarp like a worthless bale of straw. There were other piles, too, though none as large or magnificent as this one.

The treasure was connected to a series of dragon scrolls that contained secret dragon-style kung fu fighting techniques. One of the scrolls was also a map, and Tonglong had used it first to find Ying’s mother’s house, then to locate the treasure in a secret seaside cave. The cave was only accessible at low tide, and Tonglong had timed his arrival perfectly. In less than an hour, his men had stripped the cave of its contents. Now Tonglong was headed south to take care of what he called “personal business.”

ShaoShu didn’t know what that business was, but he was certain he had already gathered plenty of information for Ying and Hok. The moment he saw an opportunity to sneak off the ship, he would make a break for it.

Having been aboard the better part of a day and a night, ShaoShu had learned the rhythms of the ship’s watches. The laziest sailors were assigned to the watch that began at sunset, so that would be the best time to make his move. In the meantime, he would just have to wait.

From somewhere high above the deck, he heard a lookout shout, “Sail ho!”

“What do you see?” Tonglong asked, his metallic voice too close for ShaoShu’s comfort.

“It’s a foreign sloop, sir,” the lookout replied. “By the shape of the stern and the rake of the mast, I’d guess she’s Dutch-built. Single mast with a reefed mainsail and a storm jib set taut. She’s fast, sir, and sailed by seasoned seamen. No question about it, the way that rigging is set. She’s off our stern, if you’d like to have a look.”

“Has anyone found my telescope yet?” Tonglong roared.

Tonglong stormed across the deck. “Whoever stole it will be strung up in the rigging for the birds to pluck out his eyes and feast on his liver!”

Uh-oh, ShaoShu thought, silently taking Tong?long’s spyglass off his lap and placing it on the treasure pile.

“Can you see who’s aboard?” Tonglong called to the lookout.

“Aye, sir. Looks to be a bunch of children, if you can believe it. Four boys and a girl. At least, I think it’s a girl. She’s in a dress.”

ShaoShu’s heart leaped. That had to be Hok, along with some helpers! Maybe Ying was with her, too. ShaoShu had last seen Hok at the apothecary shop, and she must have figured out where he’d gone. She was coming to rescue him! Hok and Ying were the smartest, kindest, bravest people he’d ever met.

“What would you like me to do, sir?” someone asked Tonglong.

“If they get close enough, blow them out of the water. People in this region need to learn to steer clear of me.”

A large lump formed in ShaoShu’s throat. He’d forgotten about the gigantic qiangs, or cannons, as the sailors called them, lashed to the deck rails.

As he tried to decide what to do next, a quick darting movement caught ShaoShu’s eye. He froze, and his nose twitched. He locked his gaze on the far side of the tarp and saw a small brown blur darting about close to the ground. A mouse! He couldn’t believe his good luck.

ShaoShu relaxed, grateful for the company. He reached into the folds of his dirty robe and fished out the remains of a bean-paste bun he’d swiped from a sailor earlier. ShaoShu dropped a few crumbs on the treasure pile around him and sat perfectly still. A moment later, the mouse scurried over, greedily consuming the sweet treat.

As the mouse was finishing its snack, ShaoShu gently held out a larger piece, away from his body. The small furry creature hurried over and began to nibble on ShaoShu’s offering. ShaoShu smiled. He had always had good luck getting animals to come to him.
From the Hardcover edition.