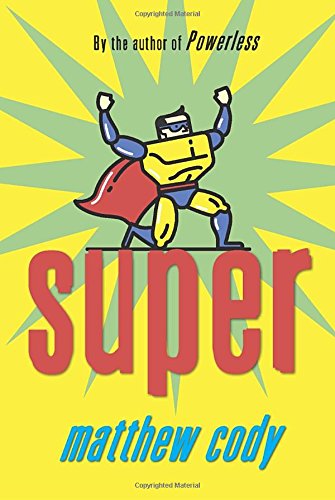 Daniel Corrigan is as regular as can be, especially when compared to the Supers: kids in his new hometown with actual powers like flight and super-strength. But Daniel’s not powerless. Only he was able to stop the Shroud, a supervillain bent on stealing his newfound friends’ powers. And thanks to him, his friends got to keep those powers.

Now Daniel himself is starting to display powers, while at the same time his friends are losing theirs. His friend Eric thinks Daniel is just becoming a Super himself, a late-blooming one. But Daniel worries there may be something more sinister at work, since his power-stealing ability is uncomfortably like the Shroud’s. Of course, the Shroud is gone now . . . isn't he? Or could Daniel himself be his new vessel?

MATTHEW CODY is the author of Will in Scarlet, The Dead Gentleman, Powerless, and the upcoming Villainous. Originally from the midwest, he now lives in New York City with his wife and young son. Besides novels, Matt has written for both DC Comics and Marvel, and is a regular moderator at the Thalia Book Club camp at Symphony Space.

Gr 5-7-Daniel Corrigan, introduced in Powerless (Knopf, 2009), continues in his struggle to be an ordinary 13-year-old kid surrounded by superpowered friends. Months after defeating their evil adversary Herman Plunkett, aka the Shroud, Daniel and company are surprised to learn that the elderly Plunkett had relatives who have decided to move to town. Most notable is teenaged Theo, who suspects that there is a mystery to be solved in the town of Noble's Green, and his determined questions threaten to expose the supertweens. Meanwhile, a new group of sinister beings dubbed Shades is attacking the Supers, and it is up to Daniel to once again save the day. But as he has begun exhibiting the ability to temporarily steal his friends' powers, does he really need to protect them from himself? Familiarity with the first title is a must to follow the events in Super and to understand why the group of friends is willing to put their faith in Daniel. Readers will likely forgive any hiccups in the story's logic as the fast-paced action and engaging characters drive the narration to a conclusion that certainly seems to indicate that there will be more to come.-Amanda Raklovits, Champaign Public Library, ILα(c) Copyright 2011. Library Journals LLC, a wholly owned subsidiary of Media Source, Inc. No redistribution permitted.