Items related to The Beet Fields 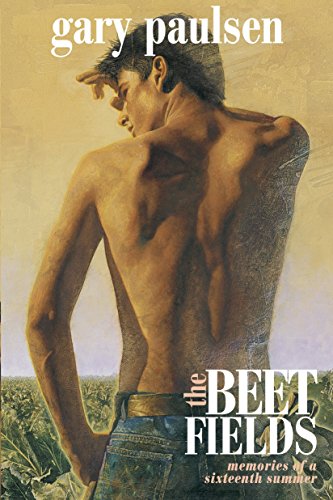 For a 16-year-old boy out in the world alone for the first time, every day's an education in the hard work and boredom of migrant labor; every day teaches him something more about friendship, or hunger, or profanity, or lust--always lust. He learns how a poker game, or hitching a ride, can turn deadly.
He discovers the secret sadness and generosity to be found on a lonely farm in the middle of nowhere. Then he joins up with a carnival and becomes a grunt, running a ride and shilling for the geek show. He's living the hard carny life and beginning to see the world through carny eyes. He's tough. Cynical. By the end of the summer he's pretty sure he knows it all. Until he meets Ruby.

The striking cover picture of a beautiful young man's bare, muscular back foreshadows the sensuality of this brilliant autobiographical novel for older boys by the author of Hatchet and Soldier's Heart. In this remarkable book, Gary Paulsen reworks material from his own life that has appeared earlier in his novels, to tell--with simple words and Hemingwayesque cadences--the story of a summer when a 16-year-old boy became a man.

Fleeing his mother's confusing drunken advances, a boy runs away and finds work in the beet fields of North Dakota. Wielding a hoe for long, hot days, he learns about cruelty from the farmer's wife and about kindness from his Mexican coworkers. Later an attraction to a girl glimpsed only once leads him into accepting a job driving a tractor, but a brush with the deputy sheriff sends him running again, only to be taken in by a sleazy carnival as a roustabout. He learns to shill for the geek, a fake wild man of Borneo who bites the heads off chickens, and yearns for Ruby, the voluptuous hootchy-kootchy dancer. During the summer the boy learns about life and people and his own ability to work and survive, and when Ruby invites him into her bed, his transition to manhood is complete.

While the sensual scenes and occasionally gritty language may make this novel problematic for adults, there is not a 15-year-old boy around who would not find that this poetic, powerful novel speaks to his soul. (Ages 14 and older) --Patty Campbell

Gary Paulsen tells the raw truth of a boy’s first summer on his own, “as real,” he says, “as I can write it.”

2. Beet Fields : The Memories of a Sixteenth Summer

5. The Beet Fields: Memories of a Sixteenth Summer (Paperback)

Book Description Paperback. Condition: New. Paperback. For a 16-year-old boy out in the world alone for the first time, every day's an education in the hard work and boredom of migrant labor; every day teaches him something more about fri.Shipping may be from multiple locations in the US or from the UK, depending on stock availability. 160 pages. 0.159. Seller Inventory # 9780375873058

10. The Beet Fields: Memories of a Sixteenth Summer