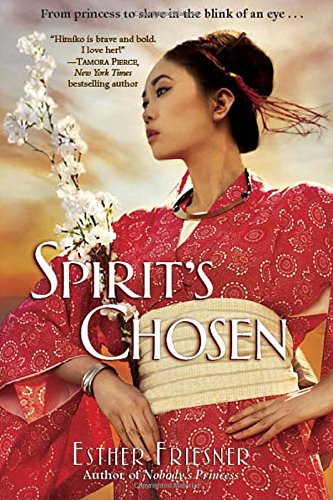 Himiko's world is falling apart. An attack by a rival clan, the Ookami, has left many from her tribe dead or enslaved. Amid the chaos and fear, Himiko hatches a plan to save her people. But just when it seems that she will outwit Ryu, the cruel Ookami leader, she is captured. Held against her will, Himiko starts to realize that not all of the Ookami are her enemies. Though she may not see her path as clearly as the spirits seem to, there's more adventure (and even unexpected love) for this princess turned shaman-warrior.

Nebula Award winner ESTHER FRIESNER is the author of more than 30 novels and over 150 short stories. She is also the editor of seven popular anthologies. Her works have been published around the world. Educated at Vassar College and Yale University, where she taught for a number of years, Ms. Friesner is also a poet, a playwright, and once wrote an advice column, "Ask Auntie Esther." She is married, is the mother of two, harbors cats, and lives in Connecticut.

Lady Himiko is back, and she is now a full-fledged shaman. But the Ookami (wolf) clan has attacked the Matsu clan’s village, killing Himiko’s chieftain father and two of her older brothers and kidnapping her younger brother, Noboru, as a slave. Himiko’s mother cracks under the strain, and Himiko and her friend Kaya set off on a dangerous journey to rescue Noboru. The girls find help where they least expect it, and they survive horrific treatment, but not without significant loss for Himiko. Friesner knows Japanese culture and history well, citing folklore to excellent effect and addressing customs and mores. A satisfying, action-packed sequel to Spirit’s Princess (2012). Grades 6-9. --Debbie Carton