Items related to Alex the Parrot: No Ordinary Bird: A True Story

Alex the Parrot: No Ordinary Bird: A True Story 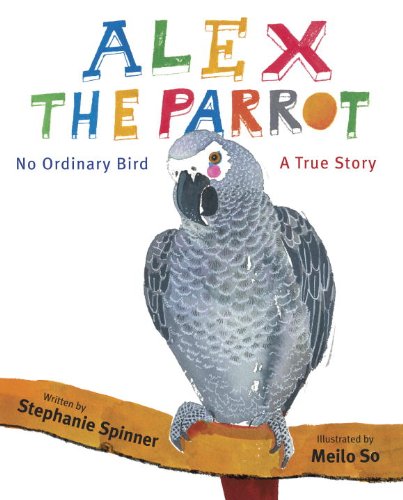 In 1977, graduate student Irene Pepperberg walked into a pet store and bought a year-old African grey parrot. Because she was going to study him, she decided to call him Alex--short for Avian Learning EXperiment. At that time, most scientists thought that the bigger the brain, the smarter the creature; they studied great apes and dolphins. African greys, with their walnut-sized "birdbrains," were pretty much ignored--until Alex.

His intelligence surprised everyone, including Irene. He learned to count, add, and subtract; to recognize shapes, sizes, and colors; and to speak, and understand, hundreds of words. These were things no other animal could do. Alex wasn't supposed to have the brainpower to do them, either. But he did them anyway.

Accompanied by Meilo So's stunning illustrations, Alex and Irene's story is one of groundbreaking discoveries about animal intelligence, hard work, and the loving bonds of a unique friendship.

STEPHANIE SPINNER is the author of many books for young readers, including Damosel, Aliens for Breakfast, and Paddywack, and Peter and the Wolf. After a distinguished career in children's book publishing, she is now a full-time writer.

“The bigger the brain, the smarter the creature”—or so scientists thought until graduate student Irene Pepperberg bought an African Grey parrot from a pet shop. Named Alex, short for Avian Learning Experiment, the bird would defy all expectations by learning to use more than 100 words; perform rudimentary mathematics; and discern shapes, colors, and more—eventually demonstrating the intellectual capacity of a five-year-old child and forever changing the way we think about animal intelligence. Divided into five chapters, Spinner’s lengthy text uses an accessible, conversational tone to balance the science with the more personal story of Pepperberg’s steadfast determination and the deep animal-human bond that developed between the two. So’s superb multimedia illustrations on white backgrounds inject vibrancy and personality and place the focus squarely on the book’s magnetic subject. A concluding author’s note touches on Spinner’s fascination with animal communication, but it does not offer any details on the author’s research, Pepperberg’s findings or her detractors, or further resources for interested readers—of which there will be many. Grades 2-5. --Kristen McKulski

1. Alex the Parrot: No Ordinary Bird: A True Story

2. Alex the Parrot: No Ordinary Bird: A True Story