Spier, Peter We the People 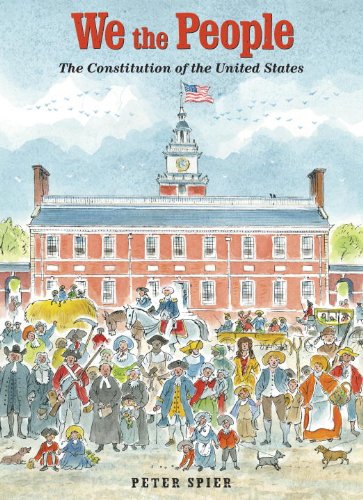 In this visual celebration of the U.S. Constitution and its framers, Caldecott Medalist Peter Spier tells the stirring American tale of how this most important document came to symbolize freedom, justice, equality, and hope for all citizens. This fact-filled volume includes: an illustrated preamble to the Constitution, illuminating its signifcance from its birth through to modern times; the fascinating history of the struggle to create and ratify the Constitution; a historical reproduction of the original document; plus the complete text of the Constitution. Back in print in hardcover—redesigned, historically updated, and with a glorious new cover—this is a must-have resource for every American school, library, and home.
From the Hardcover edition.

On his arrival in the United States in 1952, PETER SPIER became one of this country's most popular and renowned illustrators. His books, acclaimed by critics and readers alike, have won numerous awards and honors: Noah's Ark won the Caldecott Medal and The Fox Went Out on a Chilly Night was a Caldecott Honor Book. People was awarded the Christopher Medal and was also nominated for an American Book Award and received the National Mass Media Award from the National Conference of Christians and Jews for "outstanding contributions to better human relations and the cause of brotherhood." Mr. Spier was born and educated in Amsterdam. Before coming to the United States he served in the Royal Dutch Navy. He illustrated over one hundred books, and his work can be found in museums and private collections across the country. In addition to illustrating and writing, Mr. Spier was an avid and celebrated builder of model ships. Peter Spier died in 2017, at the age of 89.

Book Description Doubleday Books for Young Reader, 2014. Library Binding. Condition: Good. Connecting readers with great books since 1972. Used books may not include companion materials, some shelf wear, may contain highlighting/notes, may not include cdrom or access codes. Customer service is our top priority!. Seller Inventory # S_249812346

Book Description Doubleday Books for Young Readers, 2014. Condition: Good. A+ Customer service! Satisfaction Guaranteed! Book is in Used-Good condition. Pages and cover are clean and intact. Used items may not include supplementary materials such as CDs or access codes. May show signs of minor shelf wear and contain limited notes and highlighting. Seller Inventory # 0375972080-2-4