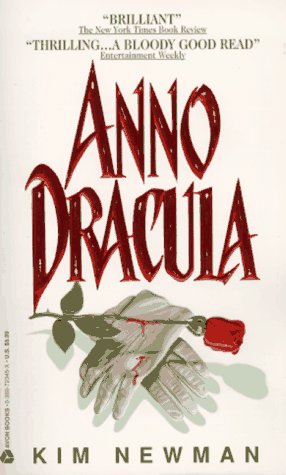 In an alternate history of the nineteenth century, Queen Victoria has married Vlad Tepes, better known as Count Dracula, leading to a reign of terror, while, in Whitechapel, Silver Knife, a murderer of vampire girls, threatens the new regime. Reprint.

As Nina Auerbach writes in the New York Times, " Stephen King assumes we hate vampires; Anne Rice makes it safe to love them, because they hate themselves. Kim Newman suspects that most of us live with them . . . . Anno Dracula is the definitive account of that post-modern species, the self-obsessed undead." In this first of what looks to be an excellent series, Victorian England has vampires at every level of society, especially the higher ones, and they engage in incessant intrigue, power games, and casual oppression of the weak--activities, as we know, that are all too human. Numerous characters from literature and from history appear in both major and cameo roles. Spectacular fight scenes, stormy politics, and a serial vampire killer keep the action lively. A scholarly bibliography is included.

Kim Newman has written numerous acclaimed and successful novels and short stories. He writes slightly more disreputable work as Jack Yeovil, has written for a wide variety of magazines and journals, is a contributing editor for both SIGHT AND SOUND and EMPIRE, and has appeared on (and scripted) a great many radio and television programs, ranging from high-end arts reviews to tacky quiz shows and horror host DR TERROR.