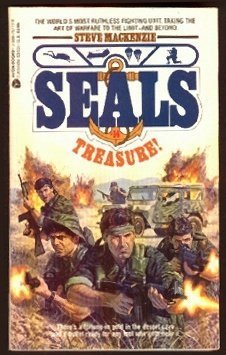 In the deadly world of modern warfare, the art of combat is taken to its awful limits. Only one fighting unit has the skill and ruthlessness to handle all this killing power, making every corner of the globe its field of fire; using with chilling efficiency every method of infiltration, demolition, deception, and destruction this side of hell. They're Navy. Those who know about them speak in awed whispers.... Tynan's on leave from the Navy and hadn't planned on searching the Arizona desert for gold. But he' out there now, stumbling over the bodies of those who came before him. And trying to catch up with the ruthless bunch of killers, before they kill again.