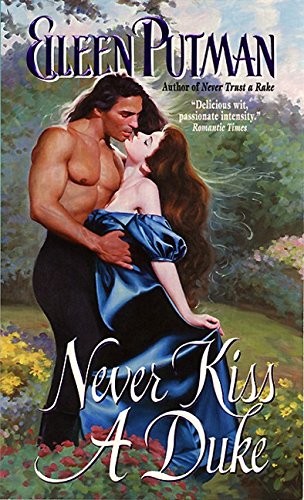 A Man Who Won't Marry

Pretending to be in search of a wife, Adrian St. Ledger, the duke of Trent, enters Emmaline Stanhope's marriage broker shop, suspecting she's involved in a plot against the Crown. However, the lovely and exasperatingly independent Emma's not at all what he expected. And when she insists he needs instruction on how to court a woman, then offers herself for practice, his cool distance quickly dissipates. Yet marriage is the last thing Adrian will ever risk.

Emma had abandoned her childhood dreams of finding Prince Charming long ago, having learned she can't count on anyone but herself. And if finding wives for busy men is the only way to keep a roof over her head, she'll happily match-make -- for others. But Emma never expected to meet a man whose aloof eyes reveal such hidden passion. And when Adrian takes her in his masterful arms, she hpes the kissing never ends -- and that a duke may turn out to be a prince after all.

"You've got me on my knees." Imagine a strong, powerful, thoroughly mesmerizing man whispering that in your ear.

Believe it or not, those lyrics from Eric Clapton's "Layla" inspired my new historical romance, NEVER KISS A DUKE (Avon, July 2000). In this case the strong, powerful guy is a duke, not a rock star, but...

Wait a minute! Rock music and historical romance in the same universe? Well, yes. Here's why:

The original "Layla" was loud and defiant, a pleading as angry as it was needy, with a soaring slide guitar guaranteed to produce goose bumps. Clapton's acoustic version is a master of understatement, a whispered and husky declaration that's hauntingly vulnerable, yet wholly masculine. It's a paean to love's transforming power.

And that's what NEVER KISS A DUKE is about.

Hero Adrian St. Ledger is fierce, powerful, controlling. I gave him claustrophobia so I could spin him out of control now and then, and because he deserved it. I gave him Emmaline, a freewheeling heroine so determined to pay for her aunt's medical care that she'll cross swords with any man in her way even a duke.

And yep, she brings him to his knees. Transforms him.

I know, I know. We're not supposed to write stories in which the hero is really changed. That's because the early feminists looked at romantic fiction and decided that:

1. Readers can't tell the difference between fantasy and reality, so romantic fiction will lead them to...

2. Stay in a lousy relationship with a mean, abusive guy in the hope fed by those wicked romance novels that if she loved him enough he would change into Prince Charming.

Anybody buy that? Not me.

Like all genre fiction sci fi, mystery, you name it romantic fiction is escapist. But it's empowering, too. The heroine wins.(The hero wins, too; he just doesn't realize it right away.)

In NEVER KISS A DUKE, Adrian hires Emmaline, a marriage broker, to find him a bride. It's a ruse; he's helping his uncle track a killer, and Emmaline is the prime suspect.

Adrian is the worst candidate for romance Emmaline has ever met. He's a churlish curmudgeon, a man of iron control. His passion is fossils; love and lust have no place in his scholarly existence. Moreover, he's sailing under false colors, concealing the ducal title that puts him so very far above Emmaline, whose cleverness is all that stands between her and abject poverty.

To answer a question posed elsewhere on this site: Can this churlish frog become a prince? Does Emmaline dare to believe in her own Cinderella story?

Of course! Love changes him (and her).

Like NEVER TRUST A RAKE (my previous Avon romance), NEVER KISS A DUKE explores the delicious tensions between the social constrictions of the Regency era and the urgent yearnings of the human heart. Love runs amok (and, occasionally, in the muck).

You'll learn a bit about Franz Mesmer, the 19th century physician who invented hypnosis and the notion of "animal magnetism" which Adrian possesses in large quantity.

Then there's Galahad, the canary, about which I'll say no more here. Rest assured that he possesses no small quantity of animal magnetism himself.

Thank you, Eric Clapton. Because music can trigger romantic fantasies in any century, because romance springs from a common thread love that links past, present and future.

And because a groveling male is such fun.