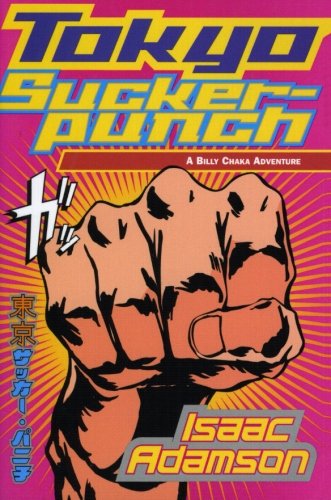 Meet Billy Chaka, ace reporter for Cleveland's hottest-selling Asian teen magazine.  He's brash, savvy, and prone to hair-trigger fits of karate.  Billy's in Tokyo to cover the 19-and-Under Handicapped Martial Arts Championship and meet up with his friend Sato Migusion, the international renowned director of such cult film classics as Sex Up the Hotrod, Baby! But Sato never shows. Instead, the girl of Billy's dreams stumbles into a dive bar with tatooed Yakuza mobsters in hot pursuit.  Then Billy will start brawls in swanky corporate sex clubs, be offered a golf club membership by a secret religious order, meet a dog trained in the ways of the Samurai, and race stolen motorcycles through the neon-choked streets of Tokyo. Packed with enough over-the-top fists action to make Jackie Chan cry, and featuring the most lovable uncool hero since Austin Powers, this hilarious send-up is a pop culture potpourri of sub-epic proportion.

Isaac Adamson was born in Fort Collins, CO, during the Year of the Pig. He plays soccer well, guitar poorly, and is currenly living in Chicago.

This pop romp through the Tokyo of martial arts, yakuza and legendary geishas has more sly smarts than a Hong Kong gangster shoot-'em-up. First-time novelist Adamson hooks the reader with fast action, clever dialogue and all-over atmosphere, while complicating the plot mightily and implausibly. Billy Chaka is a popular columnist for the Cleveland mag Youth in Asia. He's come to Tokyo to cover the 19 and Under Handicapped International Martial Arts Championship. While Chaka is waiting in a bar for the arrival of his old friend filmmaker Sato Migusho, an apparently drunken woman enters and rushes for the ladies' room. Immediately recognizing her as a geisha in disguise, on the lam from disgruntled clients, ChakaDwho has a weakness for geishasDhelps her escape and handles the tough guys with some dandy kickboxing moves. After Chaka learns that Sato has died in a seemingly accidental fire at his secret luxury hideout, the Garden of Earthly Delights, he ducks his reporterly duties and sets out to find the geisha. While on this quest, underwritten by a yakuza leader named Kwaidan and an unnamed religious cult, Chaka keeps stumbling over imponderables in the Sato case, including the news that Sato was about to film an unauthorized version of Chaka's own life, entitled Tokyo Suckerpunch. This novel is all speed and no depth, but that's forgivable in a narration that detours around such marvelous (and doubtful) Japanese pop esoterica as current fashions in Japanese motorcycle gangs and the tape-recorded politesse of Japanese vending machines. (Nov.)
Copyright 2000 Reed Business Information, Inc.

Book Description Paperback. Condition: New. Paperback. Meet Billy Chaka, ace reporter for Cleveland's hottest-selling Asian teen magazine. He's brash, savvy, and prone to hair-trigger fits of karate. Billy's in Tokyo to cover th.Shipping may be from multiple locations in the US or from the UK, depending on stock availability. 336 pages. 0.254. Seller Inventory # 9780380812912