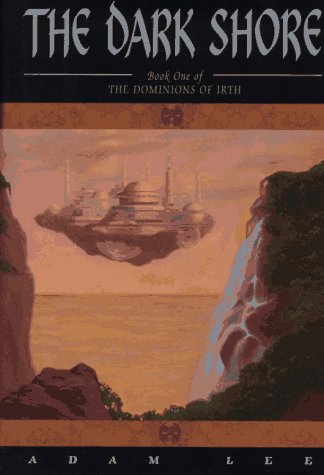 The Seven Dominions are destroyed one by one by an evil lord called Hu'dre Vra, who has returned from the Dark Shore to seek vengeance against the Dominions' protector, his sworn enemy Lord Dreve

ADAM LEE is the author of two previous novels in The Dominions of Irth trilogy, The Dark Shore and The Shadow Eater. AUTHOR HOME: Hawaii

First entry, though complete in itself, of a fantasy trilogy from newcomer Lee. Upon the Bright Shore lie the dominions of Irth; above, the Abiding Star emanates magical Charm; below, in the Gulf, exist the cold, heavy, Charmless worlds of the Dark Shore. Irth's entire socioeconomic system, from wizardry to healing, depends on Charm. Once, the wizarduke of the ruling Council was challenged by the rebellious Bold Ones; their chief, Wrat, seized Drev's magic sword, slew Drev's sister, and attempted to conquer Irth. Drew cast them bodily into the Gulf. While upon the Dark Shore Wrat nursed his rage, acquired a black magic more powerful than Charm, and formed an unholy alliance with a gremlin. Now, seeking a frightful revenge, mad Wrat has returned to Irth as the Dark Lord, accompanied, courtesy of the gremlin, by hordes of dreadful cacodemons; these, being creatures of the Dark Shore, are invulnerable to Charm. So Drev hides in the desert while seeking his soulmate, the waif Tywi, whose protectors are the thief Dogbrick and his mysterious, capable companion, Ripcat. Two aristocratic children (few others have survived Wrat's onslaught), Jyoti and Poch, while trying to locate their aged weapons master, Caval, learn how to kill cacodemons without using Charm. Finally, Caval recollects his own sojourn on the Dark Shore, and his companion, the magus Reece, who returned with him to Irth--as Ripcat. An altogether remarkable debut: innovative, intricate, intriguing, and accomplished, its flaws minor and well under control. -- Copyright ©1997, Kirkus Associates, LP. All rights reserved.