Items related to Decisive day;: The battle for Bunker Hill 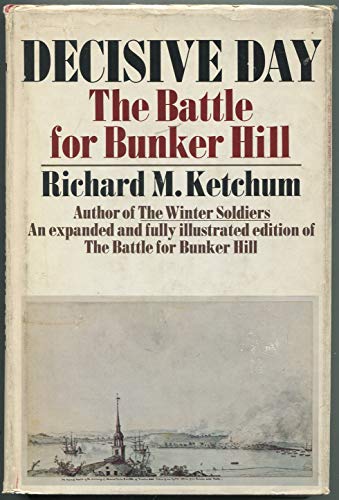 Boston, 1775: A town occupied by General Thomas Gage's redcoats and groaning with Tory refugees from the Massachusetts countryside. Besieged for two months by a rabble in arms, the British decided to break out of town. American spies discovered their plans, and on the night of June 16, 1775, a thousand rebels marched out onto Charlestown peninsula and began digging a redoubt (not on Bunker Hill, which they had been ordered to fortify, but on Breeds Hill, well within cannon shot of the British batteries and ships). At daybreak, HMS Lively began firing. It was the opening round of a battle that saw unbelievable heroism and tragic blunders on both sides (a battle that marked a point of no return for England and her colonies), the beginning of all-out war.

On the morning of June 17, 1775, British troops moved to secure the heights around Boston. Marching up an incline called Breed's Hill, they engaged a battered gathering of farmers and tradesmen who, the night before, had hastily constructed a defensive wall within range of the Royal Navy's artillery. Richard M. Ketchum tells the story of the ensuing fight in his breathtaking Decisive Day: The Battle for Bunker Hill.

Ketchum explores what made that bloody, but relatively small, action decisive by probing the deteriorating relationships between New England and Britain during the months before the battle. He forcefully argues that both the British and American commanders were still seeking ways to make peace even as the guns began to fire. After June 17, 1775, the Americans and the British could view each other only as enemies.

The author of two other books on the Revolutionary War (Saratoga and The Winter Soldiers), Ketchum has written an authoritative history of how Americans--especially the rank-and-file soldiers--won their nation through combat. In Decisive Day he argues that the remarkable transformation of American rebels into soldiers was a crucial, if intangible, episode within the battle. Indeed, as those tired and shell-shocked colonials waited on their ramparts for some of the most disciplined fighters in the world, they did not shoot haphazardly, but held their fire until they saw the whites of British eyes. --James Highfill

Born in Pittsburgh, Pennsylvania, Richard M. Ketchum graduated from Yale Unviersity and commanded a subchaser in the South Atlantic during World War II. As director of book publishing at American Heritage Publishing Company for twenty years, he edited many of that firm’s volumes, including The American Heritage Book of the Revolution and The American Heritage Picture History of the Civil War, which received a Pulitzer Prize Special Citation. Ketcham was the cofounder and editor of Blair & Ketcham’s Country Journal, a monthly magazine about rural life. He and his wife live on a sheep farm in Vermont. He is the author of two other Revolutionary War classics: Saratoga and The Winter Soldiers.