Items related to The Gospel According to Luke X-XXIV: Introduction,...

Fitzmyer, Joseph A. The Gospel According to Luke X-XXIV: Introduction, Translation, and Notes (The Anchor Bible, Vol 28A) (Chapters 10-24 v. 2)

The Gospel According to Luke X-XXIV: Introduction, Translation, and Notes (The Anchor Bible, Vol 28A) (Chapters 10-24 v. 2) 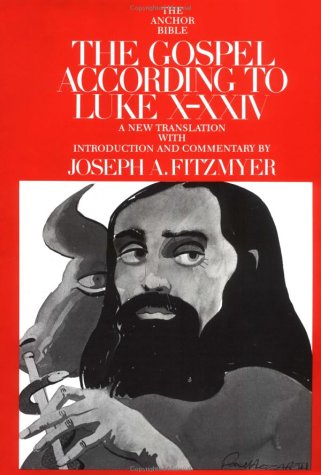 The Gospel According to Luke X-XXIV is Volume 28A in the Anchor Bible series of new book-by-book translations of the Old and New Testaments and Apocrypha.  This is the conclusion of Joseph A. Fitzmyer's two-volume study of Luke.

Included here is Fitzmyer's work on chapter 10, in which Jesus continues his journey to Jerusalem, through chapter 24, his Resurrection and appearances.  The translation relies on the commentator's familiarity with the Greek and Semitic languages, while the exegesis commands a thorough knowledge of the vast cultural, technical, and linguistic information he has gathered from an international selection of Lucan literature.  Each of the fifteen chapters here is studied and discussed in respect to the Gospel as a whole, Acts, and the Old Testament.  The two indices refer to both volumes on Luke.

In "joining the spirit to the letter" and scholarship to faith, Joseph A. Fitzmyer has produced a worthy successor to his The Gospel According To Luke I-IX, which Theological Studies described as "extraordinarily learned and rich...a benchmark in Lucan studies."

Joseph A. Fitzmyer is a Jesuit priest and Professor Emeritus at the Catholic University of America. A past president of both the Society of Biblical Literature and the Catholic Biblical Association, and coeditor of The New Jerome Biblical Commentary, Father Fitzmyer has written the Anchor Bible commentary on Romans, as well as books and numerous articles on the Dead Sea Scrolls and Qumran.

4. The Gospel According to Luke X-XXIV: Introduction, Translation, and Notes (The Anchor Bible, Vol 28A