Items related to The Squeaky Wheel 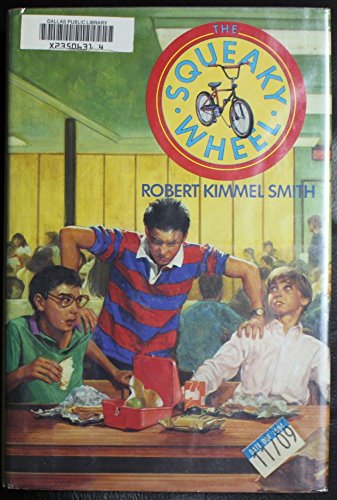 When a new friend tells him that "the squeaky wheel gets the grease," Mark Baker realizes that unless he finds the courage to confront his life, things will probably get worse.
Mark's world has been tumed upside down by the split between his parents. He' s been forced to leave his old neighborhood and his old friends. Now he's living with his mother in a new apartment in a new town. Mark still longs to be back in his old school, once again to ride his bike, to go on living in the house where he grew up.
But it's the loss of his father that worries Mark most of all. The man he depended on seeing every day is disappearing from his life.
Does Mark have any rights at all? And how can he find a road past feuding parents so he can get on with his life?
From the Trade Paperback edition.

Robert Kimmel Smith began dreaming of becoming a writer at the age of eight, when he spent three months in bed reading while recovering from rheumatic fever. He enrolled in Brooklyn College in 1947, and served in the U.S. Army, in Germany. In 1954 he married Claire Medney, his editor and literary agent. They have two children: Heidi and Roger. After writing advertising copy, Robert Kimmel Smith became a full-time writer in 1970.

Smith hits upon a lot of truths in this novel of a boy's slow and painful adjustment to his parents' separation and impending divorce. Mark is not happy with the dramatic changes in his life, and his parents often can't give him the attention he deserves because of their preoccupations with their own problems. Subplots involve Mark's confrontation with the school psychopath and his efforts to coax a super-serious Chinese student to enjoy himself more. Some characters from Smith's earlier books move around the novel's periphery, although the tone of this book is more serious than in those works. Mark's anxiety about the divorce is accurately depicted. He often worries about little things: the loss of his bicycle, the adjustment of the move from a house to an apartment, the fact that his new school building is old and a little run-down. These are part of greater anxieties, however, that are expressed in a readable manner and with a good ear for the sentence patterns and colloquialisms of young people. By the novel's end, Mark has started to make an adjustment by relying on his own inner resources. He has grown more independent and has taken steps toward becoming an adult. Readers, meanwhile, have met an engaging character. --Todd Morning, Schaumburg Township Public Library, IL
Copyright 1990 Reed Business Information, Inc.