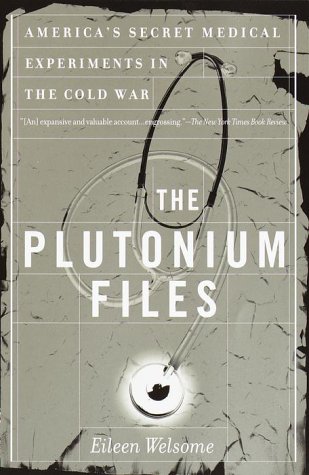 In a Massachusetts school, seventy-three disabled children were spoon fed radioactive isotopes along with their morning oatmeal....In an upstate New York hospital, an eighteen-year-old woman, believing she was being treated for a pituitary disorder, was injected with plutonium by Manhattan Project doctors....At a Tennessee prenatal clinic, 829 pregnant women were served "vitamin cocktails"--in truth, drinks containing radioactive iron--as part of their prenatal treatmen....

In 1945, the seismic power of atomic energy was already well known to researchers, but the effects of radiation on human beings were not. Fearful that plutonium would cause a cancer epidemic among workers, Manhattan Project doctors embarked on a human experiment that was as chilling as it was closely guarded: the systematic injection of unsuspecting Americans with radioactive plutonium. In this shocking exposé, Pulitzer prize-winning journalist Eileen Welsome reveals the unspeakable scientific trials that reduced thousands of American men, women, and even children to nameless specimens with silvery radioactive metal circulating in their veins. Spanning the 1930s to the 1990s, filled with hundreds of newly declassified documents and firsthand interviews, The Plutonium Files traces the behind-the-scenes story of an extraordinary fifty-year cover-up. It illuminates a shadowy chapter in this country's history and gives eloquent voice to the men and women who paid for our atomic energy discoveries with their health--and sometimes their lives.

As World War II reached its climax, the U.S. push to create an atomic bomb spawned an industry the size of General Motors almost overnight. But a little-understood human dilemma quickly arose: How was all the radiation involved in building and testing the bomb going to affect the countless researchers, soldiers, and civilians exposed to it? Government scientists scrambled to find out, fearing cancer outbreaks and worse, but in their urgency conducted classified experiments that bordered on the horrific: MIT researchers fed radioactive oatmeal to residents of a state boys' school outside Boston; prisoners in Washington and Oregon were subjected to crippling blasts of direct radiation; and patients with terminal illnesses (or so it was hoped) were secretly injected with large doses of plutonium--survivors were surreptitiously monitored for years afterward.

It was these plutonium guinea pigs that set journalist Eileen Welsome on her decade-long search to expose this grisly chapter of America's atomic age, a feat that would earn her the Pulitzer Prize. In the impressively thorough and compelling Plutonium Files, Welsome recounts her work with a reporter's gift for description, characterizing early radiation researchers as "a curious blend of spook, scientist, and soldier," tirelessly interviewing survivors and their families, and providing social and political context for a complex and far-reaching scandal. Perhaps most damning is that not only did these cold-war experiments violate everything from the Hippocratic Oath to the Nuremberg Code, Welsome reveals, they were often ill-conceived, inconclusive, and repetitive--"they were not just immoral science, they were bad science." --Paul Hughes

"A deeply shocking and important exposé... Anyone who cares about America's history, moral health and future should read this book."
-- Publishers Weekly

"There should have been--and should now be--hundreds of other reporters out there doing what [Welsome] has so brilliantly done here."
-- Newsday

"A remarkable tale... Welsome doesn't merely report [the] facts. She brings the characters to life, and re-creates settings, dialogue and events."
-- The San Diego Union-Tribune