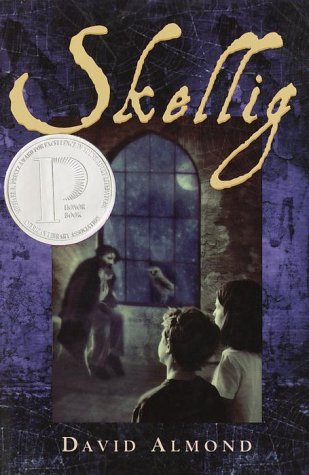 Ten-year-old Michael was looking forward to moving into a new house. But now his baby sister is ill, his parents are frantic, and Doctor Death has come to call. Michael feels helpless. Then he steps into the crumbling garage. . . . What is this thing beneath the spiderwebs and dead flies? A human being, or a strange kind of beast never before seen? The only person Michael can confide in is his new friend, Mina. Together they carry the creature out into the light, and Michael’s world changes forever. . . .

"I thought he was dead. He was sitting with his legs stretched out and his head tipped back against the wall. He was covered with dust and webs like everything else and his face was thin and pale. Dead bluebottles were scattered on his hair and shoulders. I shined the flashlight on his white face and his black suit."

This is Michael's introduction to Skellig, the man-owl-angel who lies motionless behind the tea chests in the abandoned garage in back of the boy's dilapidated new house. As disturbing as this discovery is, it is the least of Michael's worries. The new house is a mess, his parents are distracted, and his brand-new baby sister is seriously ill. Still, he can't get this mysterious creature out of his mind--even as he wonders if he has really seen him at all. What unfolds is a powerful, cosmic, dreamlike tale reminiscent of Madeleine L'Engle's A Wrinkle in Time. British novelist David Almond works magic as he examines the large issues of death, life, friendship, love, and the breathtaking connections between all things.

Amidst the intensity and anxiety of his world, Michael is a normal kid. He goes to school, plays soccer, and has friends with nicknames like Leakey and Coot. It's at home where his life becomes extraordinary, with the help of Skellig and Mina, the quirky, strong-willed girl next door with "the kind of eyes you think can see right through you." Mina and her mother's motto is William Blake's "How can a bird that is born for joy / Sit in a cage and sing?" This question carries us through the book, as we see Michael's baby sister trapped in a hospital incubator; as we see the exquisite, winged Skellig crumpled in the garage; as we meet Mina's precious blackbird chicks and the tawny owls in her secret attic; and as we finally see a braver, bolder Michael spread his wings and fly. Skellig was the Whitbread Award's 1998 Children's Book of the Year, and this haunting novel is sure to resonate with readers young and old. (Ages 10 and older) --Karin Snelson

Skellig is the winner of the 1998 British Whitbread Award for Children's Literature.

"The author adroitly interconnects the threads of the story...to Skellig, whose history and reason for being are open to readers' interpretations.... [T]he story brightens dramatically as Michael's loving, life-affirming spirit begins to work miracles."
--Publishers Weekly, starred review

"The plot pivots on the question of what Skellig is....The beauty here is that there is no answer and readers will be left to wonder and debate, and make up their own minds. A lovingly done, thought-provoking novel."
--School Library Journal, starred review

"The marvelous and the everyday mix in haunting, memorable ways."
--Kirkus Reviews, pointer

"Some of the writing takes one's breath away, especially the scenes in which Almond, without flinching, describes the beauty and the horror that is Skellig."
--Booklist, starred review

"I read this luminous novel with a sense of wonder, and it's left an imprint on my mind--and, yes, my heart--that will not easily, if ever, fade. In fact, I think Skellig deserves that risky adjective--unforgettable."
--Robert Cormier, author