Items related to More than a Mistress

Balogh, Mary More than a Mistress

More than a Mistress 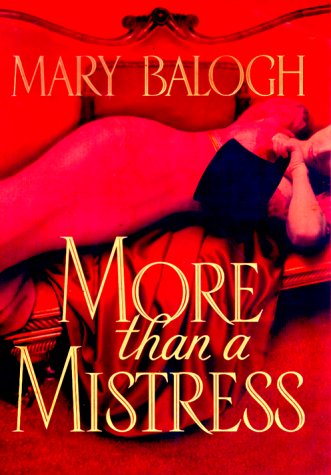 In her most captivating novel to date, Mary Balogh, the premier writer of Regency-era romantic fiction, invites you into a world of scandal and seduction, of glittering high society and startling intrigue, as an arrogant duke does the unthinkable-- he falls in love with his mistress.

More Than a Mistress

He is bad-tempered, reckless, a man superior in his abilities to charm and delight women. The greatest matrimonial prize in all of Christendom, he is the scandalous Duke of Tresham. When a young woman interferes in his Hyde Park duel, causing him to get shot, he hires her as his nurse, vowing that she will share his misery during his convalescence. Far too bold for her own good, Jane Ingleby is the kind of woman a man might find beautiful were it not for her impudence. She questions the duke's every move, scolds his bad manners, breaches his secrets, and touches his soul. When Tresham offers to set Jane up in his London town house, love is the last thing on his mind.  And hers. Trying to pretend it is strictly business, an arrangement she must accept in order to conceal a dangerous secret, Jane suspects there is nothing more perilous than being the lover of such a man. Yet as she gets past his devilish facade and sees the noble heart within, she discovers the greatest jeopardy of all--a passion that drives her to risk everything on one perfect month with the improper gentleman who thinks love is for fools.  Hailed by critics as "sensual," "unforgettable," "a matchless storyteller,"* Mary Balogh has captured the hearts of readers with her novels of breathtaking romance. In More than a Mistress she dazzles us once again with a love story that sizzles with wit and sensuality--a rare gem of wondrous storytelling that holds readers enthralled from first page to last.  *Romantic Times

Bestselling, multi-award-winning author Mary Balogh grew up in Wales, land of sea and mountains, song and legend. She brought music and a vivid imagination with her when she came to Canada to teach. Here she began a second career as a writer of books that always end happily and always celebrate the power of love. There are over three million copies of her Regency romances and historical romances in print. She is currently working on a new Regency-era romantic novel, No Man's Mistress, which features as its hero Ferdinand Dudley, the younger brother of the Duke of Tresham. You can learn more about her novels at her website: www.marybalogh.com.

1. More than a Mistress

2. More than a Mistress

3. More than a Mistress

4. More than a Mistress

5. More than a Mistress