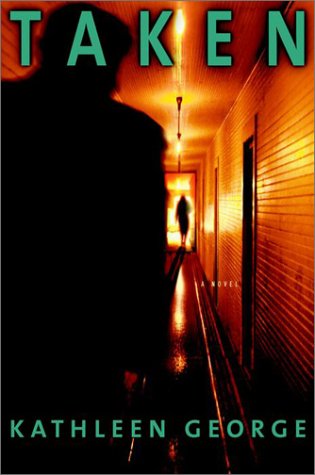 The child was taken in broad daylight, on a warm June morning, in a crowded shopping area in downtown Pittsburgh.

Marina Benedict first saw the baby with his mother. Then, just minutes later, she saw him again, in the arms of a man she was certain was not the child's father. In a single life-altering act -- as baffling as it was inescapable -- Marina followed them. Thus begins Kathleen George's breathtaking novel, a heart-pounding thriller that brings together dozens of frayed and frail lives around the fate of one baby boy....

Marina had every reason not to get involved. She'd just left her therapist's office, reeling from her decision to finally end her shattered marriage. But the sight of a baby had always caught her attention and filled her with longing -- for the child she herself has been unable to conceive. And when she sees the child again, she knows -- knows beyond all knowing -- that he has been abducted. Without hesitating, without thinking, Marina follows the kidnapper into one of Pittsburgh's bleakest neighborhoods.

Within hours, the city is galvanized by a single news story: a child, the son of a rookie pitcher for the Pirates, is missing. And suddenly Marina Benedict is at the heart of a bewildering mystery, one that grows darker and more complex with each passing day.

For as the search builds to a crescendo, dozens of lives are drawn into the drama -- Richard Christie, lead detective on the case, struggles with his own demons as he tries to unravel a mystery that has torn his city apart. And Marina Benedict, pulled from the safety of her ordinary life by a devastating crime, will not emerge unscathed. Once Marina tried to save a life and it changed her forever. Now she will risk her life again -- for a child who is still out there somewhere, still in need of saving.

A thriller of extraordinary menace and power, Taken slowly unravels a mystery that is as complex as it is heartbreaking. Like the woman who is at the center of this tale, Taken is at once alluring and deeply original: a story that takes the classic fast-paced thriller and infuses it with sensuality, insight, and compassion.

"Taken is a tough and tender thriller by a writer who knows the world of the heart as well as the world of crime. Kathleen George takes the reader on an intense, suspenseful ride in which even evil has a human face. This is a moving, gripping and mutilayered story in which the search for love touches everything, even grief for a lost baby. Ms. George's spare but eloquent style does justice to the important topic of the adoption industry in the U.S."
— Perri O'Shaughnessy, author of Move to Strike

"Taken is that rare thriller that gives as much weight to its characters and prose as it does to its ticking time-bomb plot. The story drew me in, but it was the author's fallible, very human cast that kept me coming back for more. I look forward to reading anything that Kathleen George writes."
— George P. Pelecanos, author of Right as Rain

"Taken is wonderful — tautly constructed, complex. The criminals are as interesting as the heroes."
— Nicholas Pileggi, author of Wise Guys
In the row in front of her sat a man and a baby.

If she hadn't looked, if she had sat in the front of the bus, so many things might have been different.

She looked, as she always had (on planes, in doctors' waiting rooms, anywhere), toward the sound of a child. In the man's lap was a boy in blue overalls and a T-shirt that was a sea of sailboats.

For a moment there was stillness.

It seemed the man would turn to her, but he moved his shoulder forward to shield the baby.

Marina's gut reacted long before her mind did. Her stomach dropped. A moment's vertigo seized her.

Some other child, she told herself. The man is simply being protective. She looked again.

And the baby looked at her, studied her, making his little thoughtful faces.

No, this was the same child.

She leaned forward. She thought, What am I doing? My life is falling apart, why court someone else's problem.

Kathleen George, a director and theater professor at the University of Pittsburgh, is also the author of The Man in the Buick, a collection of stories. Her fiction has appeared in many publications, including North American Review and Mademoiselle. Taken is her first novel.