Items related to The Rule of Four

The Rule of Four 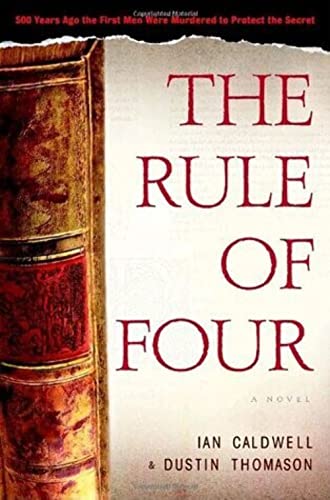 An ivy league murder, a mysterious coded manuscript, and the secrets of a Renaissance prince collide memorably in The Rule of Four—a brilliant work of fiction that weaves together suspense and scholarship, high art and unimaginable treachery.

It's Easter at Princeton. Seniors are scrambling to finish their theses. And two students, Tom Sullivan and Paul Harris, are a hair's breadth from solving the mysteries of the Hypnerotomachia Poliphili—a renowned text attributed to an Italian nobleman, a work that has baffled scholars since its publication in 1499. For Tom, their research has been a link to his family's past—and an obstacle to the woman he loves. For Paul, it has become an obsession, the very reason for living. But as their deadline looms, research has stalled—until a long-lost diary surfaces with a vital clue. And when a fellow researcher is murdered just hours later, Tom and Paul realize that they are not the first to glimpse the Hypnerotomachia 's secrets.

Suddenly the stakes are raised, and as the two friends sift through the codes and riddles at the heart of the text, they are beginnning to see the manuscript in a new light—not simply as a story of faith, eroticism and pedantry, but as a bizarre, coded mathematical maze. And as they come closer and closer to deciphering the final puzzle of a book that has shattered careers, friendships and families, they know that their own lives are in mortal danger. Because at least one person has been killed for knowing too much. And they know even more.

From the streets of fifteenth-century Rome to the rarified realm of the Ivy League, from a shocking 500 year-old murder scene to the drama of a young man's coming of age, The Rule of Four takes us on an entertaining, illuminating tour of history—as it builds to a pinnacle of nearly unbearable suspense.

"Caldwell and Thomason have created a stunning first novel; a perfect blend of suspense and a sensitive coming of age story. If Scott Fitzgerald, Umberto Eco, and Dan Brown teamed up to write a novel, the result would be THE RULE OF FOUR. An extraordinary and brilliant accomplishment - a must read."

"This debut packs all the esoteric information of The Da Vinci Code ... with lovely writing reminiscent of Donna Tartt's The Secret History.... A compulsively readable novel." --People, Critic's Choice/4 stars

"As much a blazingly good yarn as it is an exceptional piece of scholarship ... a smart, swift, multitextured tale that both entertains and informs."
--San Francisco Chronicle

"If you have a taste for puzzle-solving ... you'll be rewarded."
--San Jose Mercury News

"An impressive debut, a coming-of-age novel in the guise of a thriller, packed with history (real and invented) and intellectual excitement."
--Booklist


"Riveting, poignant, and intensely intimate, THE RULE OF FOUR is a thinking person's thriller of the highest order." --Bookpage

Dustin Thomason attended Harvard University, where he studied anthropology and medicine. He won the Hoopes Prize for undergraduate writing, and graduated in 1998. Thomason also received his M.D. and MBA from Columbia University in 2003.