Items related to Beyond Recall: A Novel

Goddard, Robert Beyond Recall: A Novel

Beyond Recall: A Novel 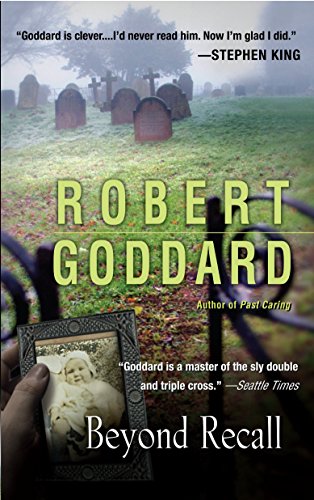 On a bright autumn afternoon in Truro, the Napier family celebrates one couple’s golden wedding anniversary and another’s marriage. But for one member of the clan, the day turns dark. Chris Napier, prodigal son, suddenly spots the ragged specter of a former friend, Nicky Lanyon—a man whose own family was ruined by the same twist of fate with which the Napiers were blessed. And the next morning, Chris is horrified to find Nicky dead, hanging from a tree where the boys once played....

For Chris, the suicide opens a floodgate of doubt and suspicion. How did his family’s wealth slip out of the hands of a great-uncle, brutally murdered before he could change his will? Were the men convicted of the crime truly guilty? And who is the mysterious, seductive woman who claims to know the Napiers’ darkest secrets? As the crimes of two families are exposed, a series of violent acts shadows him and suddenly Chris knows he’s in uncharted waters...until a killer drops one last disguise—for the ultimate act of revenge.

A carefully crafted tale of suspense, Beyond Recall interweaves present and past as Christian Napier sets out to discover the truth behind his great-uncle's murder, committed during the days of rationing and privation following the Second World War. That death provided the foundation of the Napier family's subsequent prosperity, but Christian is led to question the verdict reached in the case by the more recent suicide of an old and abandoned friend. The whole of the action is relayed through Napier's eyes and voice as he struggles to sort out his understanding of what happened before he was born, his own memories as a child, the alcohol-hazed intervening years, and the current arm's-length relationship he maintains with the surviving members of his family.

Goddard's sense of place is strong. The Cornish market town of Truro, with its 19th-century cathedral looming over events spanning a century, provides the backdrop for the mystery and also for the shifting fortunes of the British experience. Descriptions of a grand family home transformed into a hotel and conference center, the tiny chain-pulled ferry crossing an estuary as it has done for generations, and Cornwall's unchanging and temperate beauty offer convincing detail beyond the usual place-name dropping.

Although the denouement is muddled by a confusion of identities and too many people thought dead resurfacing (both to Napier's dismay and delight), the general scheme is entertaining enough and just within the bounds of what's believable, given Goddard's manipulation of the reader's expectations. The central themes of revenge and greed lose some of their power when mixed with a subplot colored by a '90s obsession with sexual misdeeds, but these flaws do not detract from the pleasure of the whole. An enjoyable read, fraught with the tension Goddard's readers have come to expect.

"One of Britain's Finest Thriller Writers"
- Time Out

2. Beyond Recall: A Novel

4. Beyond Recall: A Novel

5. BEYOND RECALL: A NOVEL