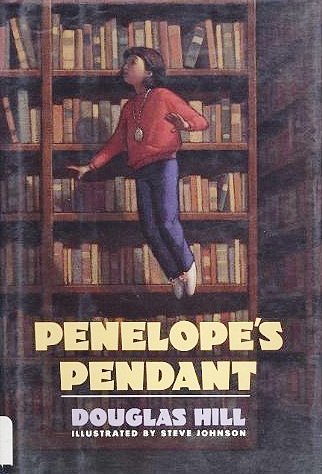 Grade 3-6-- When Penelope discovers the pendant she found at the beach will react to her thoughts, she is pleasantly surprised. She uses it frivolously and with mixed results as its power seems erratic. When a mysterious but harmless little man appears in her room to ask for the pendant's return, Penny refuses, but he offers her the safety of a "name-tie": if she is ever in trouble, all she has to do is call his name. Trouble arrives in the form of a nasty street gang and when Penny wishes herself up on a church steeple to escape their threats, she can't get down until she calls on the little man. Penny decides to keep the pendant but to store it, which suggests further adventures. This easy-to-read, fast-paced, short chapter book will appeal to readers who like uncomplicated magic such as that found in Ruth Chew's fantasies. While the setting is British, Penny's relationship with a quarrelsome older brother and her desire to have a little power advantage are universal. --Susan Hepler, Alexandria City Public Schools, VA
Copyright 1991 Reed Business Information, Inc.

One day at the seashore, 11-year-old Penelope finds a dented old pendant, which soon leads her into trouble as it grants her wishes. Like the fantasies of Edward Eager ( Half Magic ) and E. Nesbit ( The Three Children and It ), this story involves magic in an ordinary child's life and how it must not only be used cautiously, but kept secret from adults. Unlike the youthful heroes and heroines of Eager and Nesbit, however, Penelope is alone in her secret. When the magic puts her into a moral predicament, she alone decides to do the right thing by not using it to spy on her friends. Without the sibling conflict common to similar fantastic stories, Penelope comes off as a rather flat character, whose solitary adventures have the palpable feel of wish fulfillment. Readers in search of a good story of enchantment would do better with the classics. Ages 8-12.
Copyright 1990 Reed Business Information, Inc.