Items related to Places to Stay the Night

Places to Stay the Night 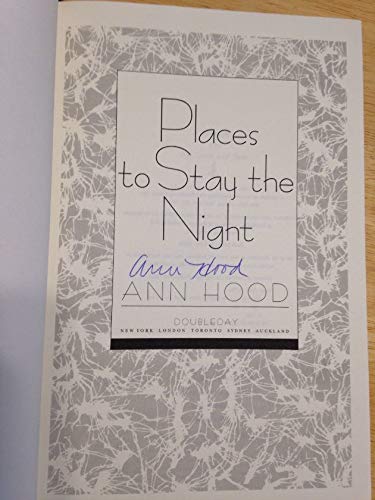 While dissatisfied Libby Harper abandons her husband, her two children, and town of Holly for something better, frenetic New Yorker Renata returns to Holly to heal her ill daughter. By the author of Somewhere Off the Coast of Maine. Tour.

Ann Hood was born in West Warwick, Rhode Island. She is the author of the bestselling novels The Knitting Circle, The Red Thread, and The Obituary Writer. Her memoir, Comfort: A Journey Through Grief, was named one of the top ten nonfiction books of 2008 by Entertainment Weekly and was a New York Times Editors’ Choice. Her other novels include Somewhere Off the Coast of Maine, Waiting to Vanish, Three-Legged Horse, Something Blue, Places to Stay the Night, The Properties of Water, and Ruby. She has also written a memoir, Do Not Go Gentle: My Search for Miracles in a Cynical Time; a book on the craft of writing, Creating Character Emotions; and a collection of short stories, An Ornithologist’s Guide to Life. Her essays and short stories have appeared in many publications, including the New York Times, the Wall Street Journal, the Atlantic Monthly, Tin House, Ploughshares, and the Paris Review. Hood has won awards for the best American spiritual writing, travel writing, and food writing; the Paul Bowles Prize for Short Fiction; and two Pushcart Prizes. She now lives in Providence, Rhode Island, with her husband and their children.

Although often poignant and compelling, this novel of physical relocation and romantic musical chairs by the author of Something Blue is ultimately a promise unfulfilled. Libby Harper, disappointed with life in small-town Holly, Mass., heads out for the perceived possibilities of L.A., leaving her husband, Tom, and their teenage children, Dana and Troy. At the same time, Libby's high school classmate, Renata Handy, who had moved to Manhattan with equally big dreams, returns home to the healthier, more "normal" Holly when her eight-year-old daughter Millie is diagnosed with a brain tumor. In a flurry of indiscriminate and often mindless sex, Libby lands a part in a floor-wax commercial, Renata lands Tom, and Dana, in her own quest for something better, lands one night-stands with much of the male student body of nearby Williams College. At their best, Hood's descriptions of people and moods are right on target: a whiff of scent, a song, even a brand name prompts instant recognition. Many elements, however, ring false. Millie, for example, seems far too precocious (even for a New Yorker), and the wordplay is egregious (Libby, whose maiden name is Holliday, leaves Holly for Hollywood; her married name is Harper and she takes up with the husband of a harpist). While Hood's characters and situations have great potential to speak directly of love, discontent, compromise and belonging, their message is garbled. Literary Guild selection.
Copyright 1992 Reed Business Information, Inc.

1. Places to Stay the Night

2. Places to Stay the Night

3. Places to Stay the Night