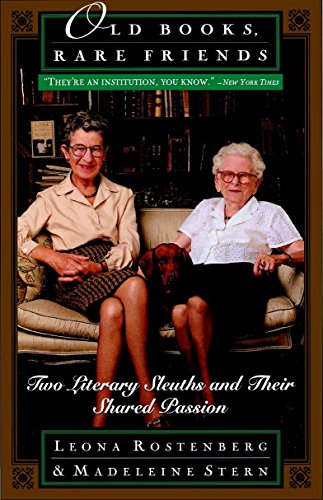 Louisa May Alcott once wrote that she had taken her pen for a bridegroom. Leona Rostenberg and Madeleine Stern, friends and business partners for fifty years, have in many ways taken up their pens and passion for literature much in the same way. The "Holmes & Watson" of the rare book business, Rostenberg and Stern are renowned for unlocking the hidden secret of Louisa May Alcott's life when they discovered her pseudonym, A.M. Barnard, along with her anonymously published "blood and thunder" stories on subjects like transvestitism, hashish smoking, and feminism.

Old Books, Rare Friends describes their mutual passion for books and literary sleuthing as they take us on their earliest European book buying jaunts. Using what they call Finger-spitzengefühl, the art of evaluating antiquarian books by handling, experience, and instinct, we are treated to some of their greatest discoveries amid the mildewed basements of London's booksellers after the Blitz. We experience the thrill of finding one of the earliest known books printed in America between 1617-1619 by the Pilgrim Press and learn about the influential role of publisher-printers from the fifteenth century.

Like a precious gem, Old Books, Rare Friends is a book to treasure about the companionship of two rare friends and their shared passion for old books.

Like 84, Charing Cross Road, Leona Rostenberg and Madeleine Stern's charming bibliocentric memoir is as much about relationships as it is about books. Charing Cross chronicled the decades-long epistolary friendship between American book lover Helene Hanff and Frank Doel, the equally devoted British bookseller in the London shop from whom she bought many of her treasures. Rostenberg and Stern's book once again proves how a passion for great literature can make for fast friends. And in their case, these two octogenarians occupy the same geographical space, sharing both their professional and private lives.

In their introduction, Rostenberg and Stern write: "Several readers inferred ... that our relationship was a Lesbian one. This was a misconception. The 'deep, deep love' that existed and exists between us ... has no bearing upon sex." With that out of the way early on, the two recount the stories of their lives in alternating sections. And oh, what lives they've had! From identifying some of Louisa May Alcott's previously anonymous early writings to traveling the world in search of rare volumes and pamphlets, they have done and seen it all. Successful antiquarian book dealers Rostenberg and Stern undoubtedly are, but as this memoir makes clear, their greatest accomplishment just might be that rarer commodity of friendship that lasts a lifetime. --Alix Wilber

This breezy dual autobiography of two writers and antiquarian- book dealers points up their extraordinary accomplishment in spheres of endeavor long dominated by men. Octogenarian New Yorkers Rostenberg, a historian of early printers and commentator on bibliographical subjects, and Stern, biographer and unmasker of Louisa May Alcott as the unknown writer of ``blood-and-thunder'' thrillers, have been friends since they were students at Columbia University and Barnard College, respectively. In alternating chapters the two detail their early lives, educations, and experiences as innocents abroad, but their story doesn't really heat up until the young Stern, with the economic freedom of a Guggenheim Foundation grant, begins working with clues from Little Women and other sources, as well as some key help from her friend Leona, to lay out the record of Alcott's ``deviational narratives,'' written pseudonymously for the pulp magazines of her day. For Rostenberg, with her academic background in 15th-century books, or incunabula, professional appreciation of vellum, morocco, and calfskin was a natural path. Descriptions of their publications and the growth of their joint business are coupled with firsthand accounts of rare book and pamphlet discoveries abroad and sales to US libraries and academic institutions. Highlights include the sale in the 1960s of several en bloc collections, such as that of the inimitable 16th-century imprint the Aldine Press, Venice, and a marvelous subject collection on Florence with more than 300 works, including Medici family histories, papal bulls, and an illustrated first edition Vasari Lives of the Artists (both collections went to the University of Texas). Of interest for the Alcott material alone, but the light-handed, nontechnical accounts of the uncommon duo's experiences as women antiquarians also make pleasurable reading for anyone immersed in the world of books. (16 pages b&w photos, not seen) -- Copyright ©1997, Kirkus Associates, LP. All rights reserved.

Book Description Paperback. Condition: New. Language: English. Brand new Book. When their friendship and business partnership began in the 1940s, Leona Rostenberg and Madeleine Stern were pioneers in a man's world. Now approaching their nineties, the duo, who -- among their many discoveries -- unearthed Louisa May Alcott's pseudonymous blood-and-thunder stories, remain a vibrant institution in the rare book trade, even as the Internet changes their field -- and their community -- forever.After publishing Old Books, Rare Friends, Rostenberg and Stern received a flood of fan mail asking about their personal lives, and they have responded with rare honesty and warmth as they reflect on their lives and their remarkable partnership. Bookends recounts their fascinating histories -- family backgrounds, business adventures, the men they did not marry, and their approach to the bittersweet trials of aging. Yet, more than just a dual memoir, Bookends is also a chronicle of the cultural changes of twentieth-century American life, and a loving farewell to the golden age of book collecting. Filled with wisdom and humor, this volume is a tribute to Rostenberg and Stern's passion for the written word, and for life itself. Above all it is a heart-touching testament to enduring human friendship. Seller Inventory # AAV9780385485159