Items related to Echoes of an Autobiography

Mahfouz, Naguib Echoes of an Autobiography

Echoes of an Autobiography 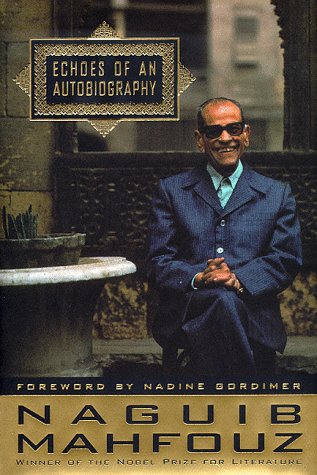 From the Foreword by Nadine Gordimer: "These pieces are meditations which echo that which was, has been, and is the writer Mahfouz. They are--in the words of the title of one of the prose pieces--'The Dialogue of the Late Afternoon' of his life. I don't believe any autobiography, with its inevitable implication of self-presentation, could have matched what we have here."

With more than 500,000 copies of his books in print, Naguib Mahfouz has established a following of readers for whom Echoes of an Autobiography provides a unique opportunity to catch an intimate glimpse into the life and mind of this magnificent storyteller.  Here, in his first work of nonfiction ever to be published in the United States, Mahfouz considers the myriad perplexities of existence, including preoccupations with old age, death, and life's transitory nature.  A surprising and delightful departure from his bestselling and much-loved fiction, this unusual and thoughtful book is breathtaking evidence of the fact that Naguib Mahfouz is not only a "storyteller of the first order" (Vanity Fair), but also a profound  thinker of the first order.
From the Trade Paperback edition.

"Fascinating...the book's greatest value by far is the sense the reader gets of Mahfouz himself--his deep but far from blind affection for the human race."--Chicago Tribune

"Each of these pieces is a brilliantly polished gem that, taken together, form an iridescent mosaic."--Booklist

"This mosaic of autobiographical vignettes, reflections, allegories, childhood memories, dream visions, and Sufi-like spiritual maxims and paradoxes is a deep pool of wisdom that confirms his stature as a writer of universal appeal."--Publishers Weekly

1. Echoes of an Autobiography

2. Echoes of an Autobiography

3. Echoes of an Autobiography Mahfouz, Naguib