Items related to The Lost Symbol 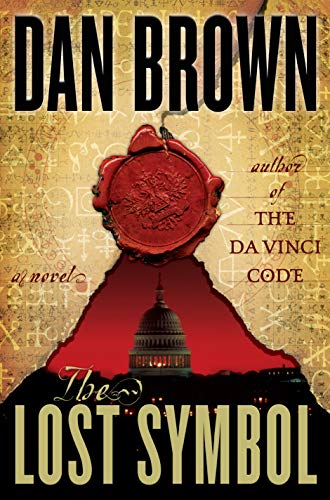 In this stunning follow-up to the global phenomenon The Da Vinci Code, Dan Brown demonstrates once again why he is the world’s most popular thriller writer. The Lost Symbol is a masterstroke of storytelling--a deadly race through a real-world labyrinth of codes, secrets, and unseen truths . . . all under the watchful eye of Brown’s most terrifying villain to date. Set within the hidden chambers, tunnels, and temples of Washington, D.C., The Lost Symbol accelerates through a startling landscape toward an unthinkable finale.

As the story opens, Harvard symbologist Robert Langdon is summoned unexpectedly to deliver an evening lecture in the U.S. Capitol Building. Within minutes of his arrival, however, the night takes a bizarre turn. A disturbing object--artfully encoded with five symbols--is discovered in the Capitol Building. Langdon recognizes the object as an ancient invitation . . . one meant to usher its recipient into a long-lost world of esoteric wisdom.

When Langdon’s beloved mentor, Peter Solomon--a prominent Mason and philanthropist--is brutally kidnapped, Langdon realizes his only hope of saving Peter is to accept this mystical invitation and follow wherever it leads him. Langdon is instantly plunged into a clandestine world of Masonic secrets, hidden history, and never-before-seen locations--all of which seem to be dragging him toward a single, inconceivable truth.

As the world discovered in The Da Vinci Code and Angels & Demons, Dan Brown’s novels are brilliant tapestries of veiled histories, arcane symbols, and enigmatic codes. In this new novel, he again challenges readers with an intelligent, lightning-paced story that offers surprises at every turn. The Lost Symbol is exactly what Brown’s fans have been waiting for . . . his most thrilling novel yet.

Let's start with the question every Dan Brown fan wants answered: Is The Lost Symbol as good as The Da Vinci Code? Simply put, yes. Brown has mastered the art of blending nail-biting suspense with random arcana (from pop science to religion), and The Lost Symbol is an enthralling mix. And what a dazzling accomplishment that is, considering that rabid fans and skeptics alike are scrutinizing every word.

The Lost Symbol begins with an ancient ritual, a shadowy enclave, and of course, a secret. Readers know they are in Dan Brown territory when, by the end of the first chapter, a secret within a secret is revealed. To tell too much would ruin the fun of reading this delicious thriller, so you will find no spoilers here. Suffice it to say that as with many series featuring a recurring character, there is a bit of a formula at work (one that fans will love). Again, brilliant Harvard professor Robert Langdon finds himself in a predicament that requires his vast knowledge of symbology and superior problem-solving skills to save the day. The setting, unlike other Robert Langdon novels, is stateside, and in Brown's hands Washington D.C. is as fascinating as Paris or Vatican City (note to the D.C. tourism board: get your "Lost Symbol" tour in order). And, as with other Dan Brown books, the pace is relentless, the revelations many, and there is an endless parade of intriguing factoids that will make you feel like you are spending the afternoon with Robert Langdon and the guys from Mythbusters.

Nothing is as it seems in a Robert Langdon novel, and The Lost Symbol itself is no exception--a page-turner to be sure, but Brown also challenges his fans to open their minds to new information. Skeptical? Imagine how many other thrillers would spawn millions of Google searches for noetic science, superstring theory, and Apotheosis of Washington. The Lost Symbol is brain candy of the best sort--just make sure to set aside time to enjoy your meal. --Daphne Durham

Dan Brown is the author of The Da Vinci Code, one of the most widely read novels of all time, as well as the international bestsellers Angels & Demons, Deception Point, and Digital Fortress. He lives in New England with his wife.

Book Description Hardcover. Condition: New. Hardcover. In this stunning follow-up to the global phenomenon The Da Vinci Code," " Dan Brown demonstrates once again why he is the world's most popular thriller writer. The Lost Symb.Shipping may be from multiple locations in the US or from the UK, depending on stock availability. 509 pages. 0.780. Seller Inventory # 9780385504225