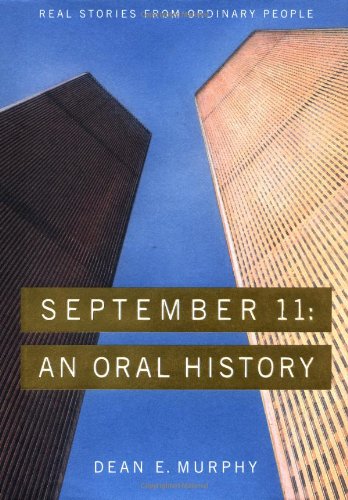 About 3,000 people lost their lives in the terrorist attacks on New York City and Washington, D.C., on September 11, 2001. Thousands more narrowly escaped, their survival a result of eerily prescient spur-of-the-moment decisions, acts of superhuman courage, the unfailing kindness of strangers, and, in some cases, fortuitous strokes of luck. September 11: An Oral History unites the voices of that day. It is at once a dramatic reminder of one of the most devastating events in history of the nation and a tribute to the spirit of cooperation and the outpourings of empathy that marked that day for so many people in the United States and abrad.

Written and compiled by Dean E. Murphy, who covered the attacks on the World Trade Center for the New York Times, September 11: An Oral History presents vivid eyewitness accounts by those who rushed to the scene, as well as the stories of people around the country and abroad who watched as events unfolded on television and waited for news of friends, family, and acquaintances.

A priest who runs an adoption center near the WTC paints an unforgettable portrait of what he calls "the meeting place of Hell and Earth that morning"; a businessman from Los Angeles in New York to conduct a training seminar recounts in breathstopping detail his descent with a blind colleague from the 78th floor of the North Tower; a senior at a high school; the owners of a small business in Arkansas describe their thoughts and feelings as they waited to hear from a customer who had become part of their lives though they had never actually met him; and a civilian employee at the Pentagon recalls giving up hope in a smoke-filled office, her hair on fire, only to be led to safety by the soothing voice of a colleague.

Contributions from firefighters, police, and military personnel, and other rescue workers demonstrate the mixture of professionalism and humanity that justly elevated them, despite their own modesty, to the status of national heroes. There are stories, too, of those who narrowly missed being part of the mayhem--including a family of four who changed their plane reservations from one of the hijacked jets and others whose arrivals at work were delayed by unlikely coincidences and quirks of fate like forgetting to turn on the coffeepot the night before.

The first and only oral history of September 11 that presents people from all walks of life, these poignant, often harrowing vignettes capture the grief, rage, and fear that gripped the nationj--and offer an intimate, inspiring look at the strengths that enabled us to move on.

Everyone has a story to tell about where they were when they first learned of the September 11 attacks. New York Times reporter Dean Murphy has gathered together first-person accounts of people working in the World Trade Center and the Pentagon as well as rescue workers and eyewitnesses. And while the magnitude of what happened that day is still hard to grasp no matter how many times one sees news footage of the tower's collapse, Murphy's technique brings the reader closer to understanding what it meant to the people who lived through it. The detail with which the interviewed subjects discuss what they went through is astonishing: a high-school student a block away is told to keep practicing the cha-cha while the towers collapse; a woman saves her own life by defying her coworkers pleadings to stay in the office and await further instructions; an office worker forgets to grind his coffee the night before and, as a result, is late enough to avoid certain death. While the stories mount, one human being after another witnessing unspeakable horror, the effect is not unlike walking along the Washington, D.C., Vietnam War Memorial: all that personal information, all those names, all that loss. But as good memorials do, it jolts the observer into a deeper, more personal understanding of human events. --John Moe

Dean E. Murphy is a reporter in New York for The New York Times. He has also covered Los Angeles, Eastern Europe, and Africa for the Los Angeles Times. A portion of the author's proceeds will be donated to charity.