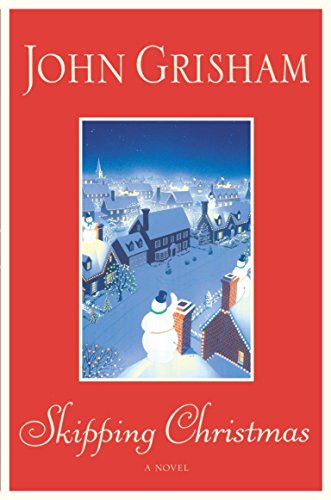 Imagine a year without Christmas. No crowded malls, no corny office parties, no fruitcakes, no unwanted presents. That’s just what Luther and Nora Krank have in mind when they decide that, just this once, they’ll skip the holiday altogether. Theirs will be the only house on Hemlock Street without a rooftop Frosty; they won’t be hosting their annual Christmas Eve bash; they aren’t even going to have a tree. They won’t need one, because come December 25 they’re setting sail on a Caribbean cruise. But, as this weary couple is about to discover, skipping Christmas brings enormous consequences–and isn’t half as easy as they’d imagined.

A classic tale for modern times, Skipping Christmas offers a hilarious look at the chaos and frenzy that have become part of our holiday tradition.

John Grisham turns a satirical eye on the overblown ritual of the festive holiday season, and the result is Skipping Christmas, a modest but funny novel about the tyranny of December 25. Grisham's story revolves around a typical middle-aged American couple, Luther and Nora Krank. On the first Sunday after Thanksgiving they wave their daughter Blair off to Peru to work for the Peace Corps, and they suddenly realize that "for the first time in her young and sheltered life Blair would spend Christmas away from home."

Luther Krank sees his daughter's Christmas absence as an opportunity. He estimates that "a year earlier, the Luther Krank family had spent $6,100 on Christmas," and have "precious little to show for it." So he makes an executive decision, telling his wife, friends, and neighbors that "we won't do Christmas." Instead, Luther books a 10-day Caribbean cruise. But things start to turn nasty when horrified neighbors get wind of the Krank's subversive scheme and besiege the couple with questions about their decision.

Grisham builds up a funny but increasingly terrifying picture of how this tight-knit community turns on the Kranks, who find themselves under increasing pressure to conform. As the tension mounts, readers may wonder whether they will manage to board their plane on Christmas day. Skipping Christmas is Grisham-lite, with none of the serious action or drama of his legal thrillers, but a funny poke at the craziness of Christmas. --Jerry Brotton, Amazon.co.uk

This is a limited edition, cloth bound book, that is signed by the author and numbered. The book is included in a cloth slipcase. There are 350 copies of this edition of Skipping Christmas available worldwide.

Shipping: US$ 13.43
From United Kingdom to U.S.A.
Destination, rates & speeds