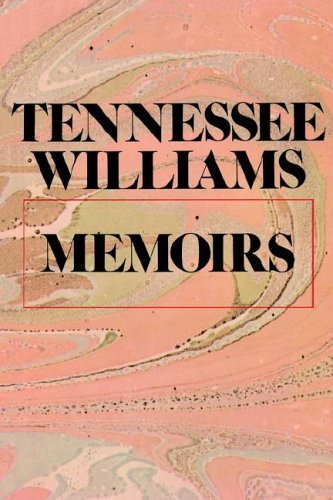 For the "old crocodile," as Williams called himself late in life, the past was always present, and so it is with his continual shifting and intermingling of times, places, and memories as he weaves this story.

When Memoirs was first published in 1975, it created quite a bit of turbulence in the mediathough long self-identified as a gay man, Williams' candor about his love life, sexual encounters, and drug use was found shocking in and of itself, and such revelations by America's greatest living playwright were called "a raw display of private life" by The New York Times Book Review. As it turns out, thirty years later, Williams' look back at his life is not quite so scandalous as it once seemed; he recalls his childhood in Mississippi and St. Louis, his prolonged struggle as a "starving artist," the "overnight" success of The Glass Menagerie in 1945, the death of his long-time companion Frank Merlo in 1962, and his confinement to a psychiatric ward in 1969 and subsequent recovery from alcohol and drug addiction, all with the same directness, compassion, and insight that epitomize his plays.

And, of course, Memoirs is filled with Williams' amazing friends from the worlds of stage, screen, and literature as heoften hilariously, sometimes fondly, sometimes notremembers them: Laurette Taylor, Gore Vidal, Truman Capote, Elia Kazan, Marlon Brando, Vivian Leigh, Carson McCullers, Anna Magnani, Greta Garbo, Elizabeth Taylor, and Tallulah Bankhead to name a few. And now film director John Waters, well acquainted with shocking the American public, has written an introduction that gives some perspective on the various reactions to Tennessee's Memoirs, while also paying tribute to a fellow artist who inspired many with his integrity and endurance.

Tennessee Williams (1911-1983) is the acclaimed author of many books of letters, short stories, poems, essays, and a large collection of plays, including The Glass Menagerie, A Streetcar Named Desire, Camino Real, Cat on a Hot Tin Roof, Orpheus Descending, The Night of the Iguana, and The Rose Tattoo.

Book Description Doubleday. Paperback. Condition: GOOD. Spine creases, wear to binding and pages from reading. May contain limited notes, underlining or highlighting that does affect the text. Possible ex library copy, will have the markings and stickers associated from the library. Accessories such as CD, codes, toys, may not be included. Seller Inventory # 3181381817

Book Description Doubleday, 1995. Condition: Good. Shows some signs of wear, and may have some markings on the inside. Seller Inventory # GRP114647341

Book Description Doubleday, 1995. Condition: Good. A+ Customer service! Satisfaction Guaranteed! Book is in Used-Good condition. Pages and cover are clean and intact. Used items may not include supplementary materials such as CDs or access codes. May show signs of minor shelf wear and contain limited notes and highlighting. Seller Inventory # 0385517564-2-4