Items related to Hot Mamas: The Ultimate Guide to Staying Sexy Throughout...

Paget, Lou Hot Mamas: The Ultimate Guide to Staying Sexy Throughout Your Pregnancy and the Months Beyond

Hot Mamas: The Ultimate Guide to Staying Sexy Throughout Your Pregnancy and the Months Beyond 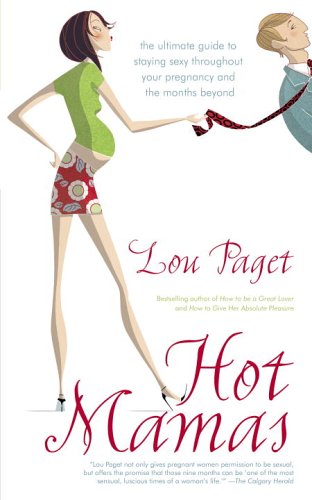 From North America’s most sophisticated sex educator, whose books top two million copies in print, comes a one-of-a-kind guide to embracing your sensuality during and after the emotional and physical changes of pregnancy

Everywhere you look today you’ll find pregnant women embracing their newfound curves and the idea that pregnancy can be one of the sauciest, sexiest times of their lives. Lou Paget, who has made a name for herself by combining the latest research findings with the most popular topics in her field of sexuality, is at it again with her taboo busting and groundbreaking research to help women maintain their sensuality and sexuality while dealing with changes in body, relationship, and lifestyle during and after pregnancy. All the questions women — and men — have regarding pregnancy and sex will finally be answered by one of the country’s foremost experts on sexuality and relationships, putting all of the contradictory information to rest. A guide like no other, Hot Mamas addresses such topics as:

· Detailed explanations of how the biological changes during pregnancy can impact your sexuality
· Why pregnancy can significantly enhance a woman’s orgasms and sex drive
· The best positions for each month of each trimester, including the six-month period after birth, also known as the “4th trimester”
· What to do if intercourse seems out of the question
· Important questions to ask your physician or midwife
· Ways to ensure your pregnancy ushers in a new and expansive side to your relationship and your sex life

Pregnancy shouldn’t mean a hiatus from intimacy. With compassionate, straightforward advice and illuminating how-to illustrations, Hot Mamas at last tells pregnant women and their partners everything they need to know about making this one of the sexiest times of their lives and is sure to make readers view pregnancy in an exciting new light.
From the Hardcover edition.

AASECT certified sex educator Lou Paget is the author of four previous sex guides: How to Be a Great Lover, How to Give Her Absolute Pleasure, The Big O, and 365 Days of Sensational Sex. Her sold-out Sexuality Seminars are taught throughout the US, Canada, and Europe, and her advice appears frequently in the media. She lives in Los Angeles, California.
From the Hardcover edition.

Sex During Pregnancy: The Challenges and the Payoffs

Ladies, I am here to share with you how other couples have benefited physically, emotionally, and spiritually by keeping their sexual pilot lights on during pregnancy. It’s entirely up to you to choose when and how to turn on the heat, but by listening and staying open to the experience of others, you may feel more informed and therefore more motivated to remain sexual throughout your pregnancy. Consider what Colleen, a forty-year-old mother, shared with me: “This is my second pregnancy, and I seem to have no recollection of ever feeling this tired with my first child. But this one has really taken the wind out of my sails. Usually my partner and I have sex once or twice a week — sometimes even three times. But once I started getting so tired, I just didn’t feel like sex. Then we tried it — what can I say? It’s like a magic elixir — the sex makes me feel more energetic and less tired!”

Now, before you begin to mentally fling items at Colleen, let me assure you that Colleen is not alone. Nicole, a university law professor, shared, “I developed an entirely different relationship with exhaustion. I now know the meaning of bone weary. Yet exhausted as I was, I still found my husband hot. When I got home from work, all I wanted was to be held by him. Call me crazy, but staying sexual with him was what took care of me.” It’s true: sex during pregnancy not only happens but it can also deliver enormous pleasure, gratification, and sometimes welcome relief.

However, lest you think I have heard only one perspective — not so. I spoke with plenty of women who said they were not at all interested in sex during pregnancy. “You’ve got to be kidding,” said Mariellen when I asked her if she experienced an increase in her libido during pregnancy. “I wouldn’t let my husband near me! I was so exhausted and so sick during my first three months, sex was the furthest thing from my mind.” But after a thoughtful pause, she added, “It’s been almost two years, and I wish I had stayed sexual with my husband. But it was like society gave me an excuse — you don’t hear a lot about pregnant women wanting or needing sex. I just thought it was natural to stop, so I didn’t even try.”

Other women also expressed their regret about not having stayed sexually connected to their partners during pregnancy. Dana said, “Sex was the last thing I wanted. I felt so weighed down physically and emotionally, I just wanted to be left alone. But now I see how long it has taken to get our relationship back on the sexual track.”

The deep frustration of these women came through loud and clear. At the time, they didn’t feel the motivation to be sexual, but they also never considered choosing to be sexual. As a result, they often felt alone and overwhelmed by their lack of connection to their partners — not exactly an inspired mood for sex. So how can women respond differently to this situation? Is there a way to get in the mood when the challenges of pregnancy seem stacked against you?

From listening to hundreds of women who did stay sexually connected — to themselves and their partners — during their first trimesters and throughout their pregnancies, I found that the consistent underlying factor was their having made a conscious decision to be and stay sexual. The women who enjoyed sexual and sensual pleasure throughout the tumultuous nine and a half months also held fast to a common belief: that the best thing they could do for themselves, their relationship, and the future well-being of their soon-to-be-born child was to stay in touch with that part of themselves that allowed sexual pleasure and sought out fulfillment of that desire.

This chapter is devoted to looking at what’s going on with you emotionally and psychologically during your first trimester so that you can consider making the choice to stay sexually and sensually alive during your first trimester and throughout your pregnancy. How you approach and handle your sexuality is up to you. It’s a private, personal decision that requires thought and care. And while I respect any choice or decision made, I do want to add one insight I’ve learned from working with thousands of women, men, and couples over my twelve-year career in sexuality: the more women stay open to their sexuality — in its many guises — the stronger and more self-assured they feel in every aspect of their lives, pregnant or not.

The Reality of Staying Sexually Connected During Pregnancy

There is no doubt that pregnancy is one of the most challenging times of a woman’s life. The mental and emotional shift that is taking place can be quite dramatic. Along with your expanding waistline and the hundreds of other biological changes that are going on, you are probably mentally grappling with the whole idea of changing your life forever by becoming a mother. Indeed, there can be many things rather frightening about moving into motherhood. In a 1999 study presented to the annual clinical meeting of the Society of Obstetricians and Gynecologists, Dr. Elias Bartellas, professor at the Memorial University of Newfoundland, reported that more than 42 percent of 142 pregnant women surveyed revealed that their sexual desire was either the same or increased during pregnancy. This finding was reinforced by my own survey of 30 couples in which 41.6 percent (12) of the women who responded said they experienced an increase in their libido and sex drive.

What do these numbers mean?

Quite simply, they show that about 58 percent of women feel sexually encumbered by the challenges of pregnancy. They are either so uncomfortable with the physical and emotional changes brought on by pregnancy that they lose touch with their libido, or they are reluctant and afraid to see themselves as sexual beings while preparing for motherhood. But before you feel too demoralized to read further or too disconnected from such experiences, let me present another interesting finding. In an even more recent metacontent analysis study, in which Dr. Kirsten von Sydow analyzed the findings of fifty-nine studies conducted between 1950 and 1996 of sexuality during pregnancy and after childbirth, it was found that though “on average, female sexual interest and coital activity declines slightly in the first trimester... 82 percent of a female sample think that intercourse should be practiced during the whole pregnancy. When intercourse must be avoided for medical reasons, 82 percent prefer mutual petting.”

These numbers don’t contradict the study mentioned above, but instead point to how complicated pregnancy and sex is for many women. If only 42 percent of women reported feeling in touch with their libido but 82 percent know it’s best to stay sexually connected to themselves and their partners during pregnancy, then there is a discrepancy between what women want and what women experience. I’d like to focus on making all 82 percent not only desirous of being sexual but capable and fulfilled by doing so. The slightly smaller group of women (the 42 percent) show that it is possible to feel not only sexually turned on during this time but motivated to stay sexually aware and connected to oneself and one’s partner — despite the challenges presented by pregnancy.

This premise is further supported by Dr. von Sydow’s findings that “if both partners are sexually active during pregnancy and enjoy it, the relationship is evaluated as better with regard to tenderness and communication at four months postpartum, and three years later, the relationship is more stable and less affected in the view of both partners.” That is the ultimate promise of staying sexual throughout one’s pregnancy: by staying sexually connected during this time, you make sure that you can take care of your child, yourself, and your relationship.

So how do you make the choice to stay sexually connected during your first trimester and throughout your pregnancy?
From the Hardcover edition.

1. Hot Mamas: The Ultimate Guide to Staying Sexy Throughout Your Pregnancy and the Months Beyond

2. Hot Mamas: The Ultimate Guide to Staying Sexy Throughout Your Pregnancy and the Months Beyond

3. Hot Mamas: The Ultimate Guide to Staying Sexy Throughout Your Pregnancy and the Months Beyond

4. Hot Mamas: The Ultimate Guide to Staying Sexy Throughout Your Pregnancy and the Months Beyond