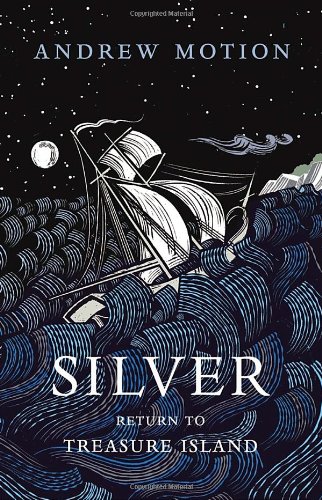 July, 1802. In the marshy eastern reaches of the Thames, a young boy spends his days roaming the mist-shrouded estuaries and listening to his father's tales of adventures: on the high seas, of curses, murder and revenge, black spots and buried treasure--and of a man with a wooden leg.

It's almost forty years after the events of Robert Louis Stevenson's Treasure Island: Jim Hawkins now runs an inn called the Hispaniola on the English coast with his son, Jim, and Long John Silver has returned to England to live in obscurity with his daughter, Natty. Their lives are quiet and unremarkable; their adventures have seemingly ended.

But for Jim and Natty, the adventure is just beginning. One night, Natty approaches young Jim with a proposition: return to Treasure Island and find the rest of the treasure that their fathers left behind so many years before. Jim joins Natty aboard a ship--the Nightingale--and the new friends set out to sail in their fathers' footsteps. But their journey is fraught with murderous pirates, long-held grudges, and greed and deception lurking in every corner. When they arrive on Treasure Island, they find terrible scenes awaiting them and difficulties which require all their wit as well as their courage. Nor does the adventure end there, since they have to sail homeward again...

Andrew Motion was born in 1952. He began his career teaching English at the University of Hull. He has also been Editor of the Poetry Review, Editorial Director of Chatto & Windus, Poet Laureate, co-founded the Poetry Archive and was knighted for his services to literature in 2009. He is now Professor of Creative Writing at Royal Holloway, University of London and a Fellow of the Royal Society of Literature.

“With Silver, Andrew Motion places the poet adventurer up in the sky where he belongs, coasting and gliding in favorable winds, pointing the way to literary treasure.”
—The New York Times

“. . . his ambition is admirable, as is his stylistic elegance.”
—Kirkus Reviews

“Like Stevenson's engrossing tales, Silver is crammed with incident, intrigue and peril. Motion has added a lofty moral mission that transcends mere greed: the liberation of a pathetic group of slaves who are victims of the marooned pirates' debauchery and brutality. . . . one gets easily swept up by the suspenseful story Silver tells, and the excitement, dread and courage of its young narrator and his companions. For maximum enjoyment, consider a return to Stevenson's seminal Treasure Island as a refresher, or a prequel.”
—The Seattle Times

“Silver is a magical book which reawakens the love of reading that I first discovered as a child. Conjured up from the mists of the Thames—seafaring adventurers, a handsome ship, and a treasure of silver spring vividly from the page. Andrew Motion's writing has both a classical elegance and a lyrical cadence which animates this iconic story brought forward in its life.”
—Dr. Vincent Lam, author of The Headmaster’s Wager

“This is an adventure story by a novelist with a poet's vision -- but then, so was the original. If it is difficult to write about this novel without constantly referring back to Treasure Island, that is perhaps a sign of how effectively Motion has returned to Stevenson's compelling world.”
—Winnipeg Free Press

“It takes a lot of bottle, and talent, to write a sequel to a classic as beloved as R. L. Stevenson’s immortal Treasure Island. Andrew Motion pulls it off with his bold and brilliant Silver. I started it thinking he had a bit of a cheek and was instantly drawn into what can only be described as a really first-class Rattling Good Yarn. . . . this is the sort of novel that cries out for a rainy afternoon and home-made toffee.”
—The Times (UK)

“Elegant, affectionate homage to Robert Louis Stevenson... A piece of writing born of genuine love and respect for the original... Like Stevenson, Motion has achieved that very difficult thing: a children’s novel that works even better for adults.”
—Adam Lively, The Sunday Times

“Like Stevenson, Motion has achieved that very difficult thing: a children’s novel that works even better for adults. Look to your laurels, Rowling”
—John Sutherland, The Times

“There are sequels and prequels aplenty, but this follow-up to Robert Louis Stevenson’s Treasure island by the former Poet Laureate reeks of authenticity, cunning, intrigue, suspense and adventure.  It’s brilliant, and for all ages”
—Henry Sutton, Daily Mirror

“This is writing of a high calibre and it is sustained throughout a tale that rarely flags... Silver’s plot twists and turns and introduces elements beyond even Stevenson’s imagination.  The result is a fascinating and richly colourful novel that can be read by children with an appetite for adventure and adults who will relish reliving the glory days of youth”
—Alan Taylor, Herald

“[Motion] reinvents Stevenson’s world to reveal its dark underside, illuminating both its mysterious beauty and its grim immortality.  Silver provides a fitting sequel to Treasure Island, certainly, but also stands in its own right as a companion volume to a literary classic”
—Daisy Hay, Observer

“A thrilling follow-up to Robert Louis Stevenson’s Treasure Island...Silver is a novel that will appeal to readers of all ages. Beautifully written and genuinely exciting...Best of all, Motion’s novel stays true to Stevenson’s original tale while adding an extra dimension”
—Emma Lee-Potter, Daily Express

“Silver...captures something of the old magic. The thrilling flight across moor and heather that Henry James admired in Kidnapped.... finds expression in Silver’s action scenes set amid Caribbean waters”
—Ian Thomson, Financial Times

“Motion writes beautifully. . . . Silver more than holds its own as an adventure story. As a reminder of how innocently men once wrote of murder, greed and depravity, it is a salutary tale indeed.”
—The Independent (Ireland)

Book Description Doubleday Canada. Hardcover. Condition: GOOD. Spine creases, wear to binding and pages from reading. May contain limited notes, underlining or highlighting that does affect the text. Possible ex library copy, will have the markings and stickers associated from the library. Accessories such as CD, codes, toys, may not be included. Seller Inventory # 3005392297

Book Description Doubleday Canada. Hardcover. Condition: As New. An apparently unread copy in perfect condition. Dust cover is intact; pages are clean and are not marred by notes or folds of any kind. At ThriftBooks, our motto is: Read More, Spend Less. Seller Inventory # G0385670699I2N00

Book Description Doubleday Canada. Hardcover. Condition: Very Good. A copy that has been read, but remains in excellent condition. Pages are intact and are not marred by notes or highlighting, but may contain a neat previous owner name. The spine remains undamaged. At ThriftBooks, our motto is: Read More, Spend Less. Seller Inventory # G0385670699I4N00

Book Description Doubleday Canada, 2012. Condition: Good. A+ Customer service! Satisfaction Guaranteed! Book is in Used-Good condition. Pages and cover are clean and intact. Used items may not include supplementary materials such as CDs or access codes. May show signs of minor shelf wear and contain limited notes and highlighting. Seller Inventory # 0385670699-2-4