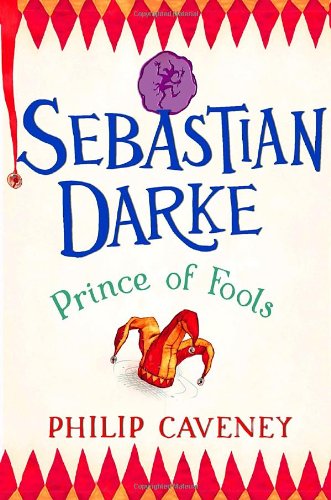 The lord of Laughter, the Monarch of Mirth–if only the bumbling 17-year-old Sebastian Darke could be a successful jester like his father. The problem is Sebastian’s not funny. But after his father’s death, with no choice but to beg in the streets, the half-human, half-elf teen sets off with Max, his father’s slightly cynical Buffalope, to offer his services as a jester to King Septimus of Keladon. On the way they meet Captain Cornelius Drummel, small in stature, but the fiercest of fighters. The three rescue the fair princess Kerin, who’s being held captive by brigands, and happily escort her home. If only Sebastian knew the kidnapping was engineered by the evil King Septimus!

Sebastian Darke has the world on his narrow shoulders. The son of a human father and an elvish mother, he is desperately trying to become the family breadwinner as a jester and self - styled 'Prince of fools'. Trouble is, Sebastian can't tell a joke to save his life.

Accompanied by his talking (and endlessly complaining) buffalope, Max, he sets off for the fabled city of Keladon, where he hopes to be appointed court jester to the incredibly powerful King Septimus. On the way he encounters a tiny but powerful warrior called Cornelius; the beautiful and captivating Princess Kerin; blood thirsty Brigands and enough perils to make him wonder why he ever decided to leave home.

A swashbuckling adventure in the great tradition of THE PRINCESS BRIDE.

Philip Caveney has written many novels for adults. This is his first book for young adults. He lives in England.