Items related to The Monster Variations 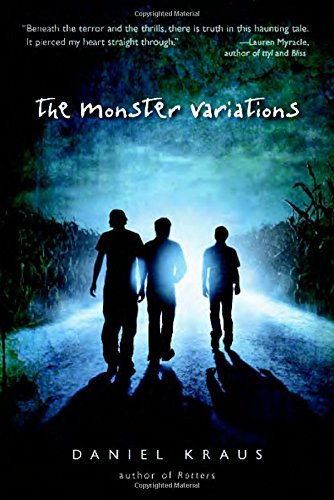 Someone is killing boys in a small town. The weapon is a truck and the only protection is a curfew enacted to keep kids off the streets. But it's summer, and that alone is worth the risk for James, Willie, and Reggie.

DANIEL KRAUS is a writer, editor, and filmmaker. He lives with his wife in Chicago.

This was all James was thinking as he muscled the wheel left and pulled the car across yellow lines, pocked cement, a sleet of gravel and dust. Five minutes and a tank of gas and he would be on the road--no more stops until he saw the university rise from the hills. Then these towns, all of them, would be behind him and his new life would begin. He might never come back.

But first, fuel. James was just thirty minutes outside of town, in an even smaller township made up of little more than one sleepy tavern, a scattering of silos reaching up from competing cornfields, and a single derelict gas station contaminating the leafy countryside. There had been filling stations back in his hometown, three of them, but he had wanted to get out of there as quickly as possible. James aimed his vehicle at the fuel pump. These small towns, he thought, tasting rust in the air and feeling the sting of burnt oil in his nostrils. Goodbye to them forever.

The tassel from his graduation cap swung from his rearview mirror, and as he rolled the car up next to the pump, it bounced and twirled, striking out the sunlight, then blinding him with it, as it had been doing since he had set out, as it had been doing ever since graduation. His friends hung their tassels from their rearviews, so he did as well, but all summer it had been a constant, dangling annoyance that would not quit reminding him of the town he was leaving and the bright future that everyone kept assuring him was waiting for him just up the road, just a few short hours away.

James struck the tassel with the back of his hand. It exploded into a pom-pom as cheery as the crowd of parents that had applauded when he had given his class's graduation speech two months ago. He'd taken his diploma on that stage and shaken the hand of a school superintendent he had never met before but who nonetheless gripped his palm and purred through clamped teeth, "We're all proud of you, son. Go get 'em up at State." James had nodded obediently and now regretted it. How much longer would he have to be obedient? How many more times would he do what his mother, his teachers, his classmates told him to do? Not much longer, he thought, glaring at the tassel. Five more minutes and I'm gone.

Getting out of town had been a nightmare. His parents, divorced but living just ten blocks from one another, had seen to that. After all the years of waiting, and after all he had been through, James thought getting to college would be as easy and as pleasant as getting into his car and driving there. He was wrong. It involved one hundred hours of strategy, toil, negation, inspiration. To his parents, the end of the world was tied up with one question: which of them would get to accompany James on the trip? His father, a hand clutching at what was left of his hair, explained slowly to his mother that James was a young man, moving into a dormitory full of other young men, and it was against nature to be brought into such a world by a woman. James winced--his father walked right into that one.

"Who brought him into this world in the first place?" his mother replied, her bottom teeth fretting against the old scar that slanted through the pink of her upper lip. "I've raised him," she said, keeping her voice as steady as she could. "Five years, me alone, in this house, cooking his food and hanging his laundry, and with whose help? No one's. And I didn't do it so I could pass him off to you like a football, so you could score the touchdown."

It was an apt comparison. James felt battered by these endless negotiations. But what else was life? You be quiet, you get a cookie. Sit still for church and we'll go out for burgers. As far as he could tell, only the stakes changed with age. So he sat calmly as they argued--he even smiled on occasion--while envisioning for the both of them a thousand gruesome deaths: hacksaws, stranglings, meat grinders, escapee elephants. The violence of these images used to surprise and shame him. Both feelings, he had discovered, wore off.

His father believed that life was math, ratios, fractions, all things at which he excelled, so his arguments towered over those of James's mother; they were masterpieces of logic more convoluted than the advanced-placement calculus tests James had recently aced. Given enough time, his father could prove that mankind descended from calico cats or that the West had won the Civil War. Yet this was one campaign he could not win. His ex-wife, James's mother, had one single, unassailable point, which she repeated with myopic persistence: "It's not fair."

What they really wanted was to have the final word, the opportunity to impart some divine piece of parental wisdom that would trump all that came before it. But if there actually was wisdom to impart, thought James, why had they both waited this long to hand it over? And if they were so wise, then why couldn't they come up with a way for the three of them to get along?

Revenge fantasies could get him only so far. It was time for action. James considered his options and just one made sense: he needed a clean break from the people and memories that surrounded him. So, one week before leaving, James woke up early, called his girlfriend, Clara, and dumped her. He started to feel guilty; he refocused and didn't back down. She cried and James timed it: ten minutes, not bad. For the past several months she'd been a nice enough girlfriend, but he'd really only miss their physical contact, and knew that beneath the perfunctory tears she felt the same. Clara went to a different school, as had his previous girlfriend, Jennifer, and the thing he liked best about the arrangement was that they were ignorant of his anesthetized daily life: the smiling boy scoring straight A's in a world without risk or danger. With Jennifer and Clara he had savored the intoxicants of nastiness, flavors he hadn't sampled since he was twelve. He could treat these girls badly, and had, because there was no social consequence at home or in school. It was wrong, he knew that, but he was not willing to give more of his heart than was necessary to keep a girl's interest--his heart, in fact, seemed lost somewhere in the past. At college no one would know him and he hoped this would further facilitate recklessness. Perhaps the imaginary pain he inflicted on everyone would no longer be necessary because there would be real pain, his included, instead of this numbness that stole his life's every second.
From the Hardcover edition.