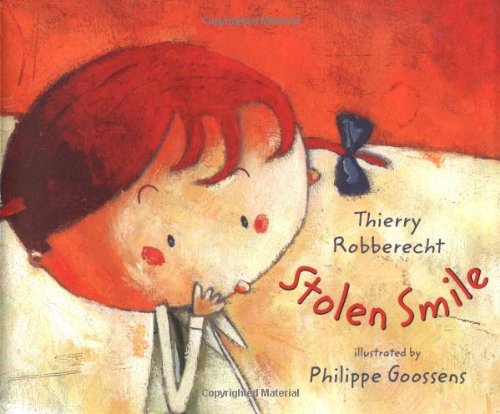 A wonderful antidote when someone’s mean words or actions get you down! Sophie isn’t smiling anymore–someone took her smile away. It’s making her very unhappy. But enough moping around! Sophie is determined to confront a bully and get her smile back!

PreSchool-Grade 2-When Sophie loses her smile, the kids in the schoolyard ask her what's wrong, but she won't say. Once home, her Mom and Dad are worried, and try to help her find it. But Sophie knows exactly where it is. Willard has stolen it. One day, he and his friends laughed when Sophie asked them to play. "`We don't play with girls,' they snickered," and she's convinced that he stole her smile. Finally, oversized Aunt Grumbler sets everything straight, telling Sophie "I bet Willard laughed because he likes you." After that, she confronts him, saying, "You're a silly boy-. And I know something. You like me." Willard is so surprised and embarrassed that his face turns red and he falls over backward, but while on the ground he smiles up at Sophie. Ah. She's found her smile at last. Typical boy-girl playground angst fills this simple, short, and effective story. The art is reminiscent of David Shannon's drawings in No, David! (Scholastic, 1998), especially when the oversized, laughing mouths of the children fill the page. The larger-than-life heads and triangular-shaped bodies of the characters, as well as the interesting perspectives and points of view of the illustrations, make this an engaging story.
Leslie Barban, Richland County Public Library, Columbia,
Copyright 2003 Reed Business Information, Inc.

"Yesterday, in the schoolyard, I lost my smile," recounts the unnamed, pigtailed narrator of this keenly observed drama from a Belgian team. Well-meaning friends and family ask her what's wrong ("Did someone step on your toe?" asks her best friend); Daddy dresses as a clown. Still, the girl's smile won't return (there's actually a blank spot where her lips should be). "Why did I always have to be smiling, anyway?" she asks herself. "Did my mom and dad love me, or did they love my smile?" But the girl quickly bucks up and confronts her smile thief, a boy named Willard. The girl's forthrightness literally knocks Willard for a loop, and soon she's grinning from ear to ear. Goossens's distorted characterizations and chiaroscuro stylings may be off-putting for some children (the girl's aunt, who correctly pegs Willard as a tease, is quite frightening), but the compositions convey the heroine's emotional depth. The hot orange that he favors on almost every page eloquently reflects the girl's inflamed feelings, and the acrylic paint looks as if it has been applied to concrete and then halfway washed off-a technique well suited for a story that unfolds on that emotional crucible otherwise known as the blacktop. Ages 3-7.
Copyright 2002 Reed Business Information, Inc.