Items related to Life as It Comes

Bondoux, Anne-Laure Life as It Comes

Life as It Comes 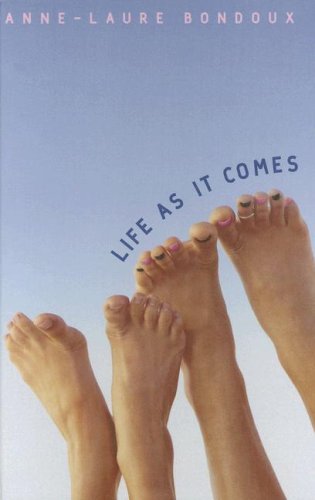 Sisters with nothing in common? That's Mado and Patty.

Studious and responsible, 15-year-old Mado is the family brain. Patty, on the other hand, is a carefree 20-year-old party girl who lives on her own and has plenty of boyfriends. The two are following divergent paths . . . until their parents die in a car accident and a family court judge reluctantly appoints Patty as her sister's guardian.

Now these two improbable siblings face the challenges of growing up together—but it's Mado who quickly assumes the big sister's role. And it's not a role she particularly wants—especially after Patty announces that she's several months pregnant. . . .

Anne-Laure Bondoux writes with insight, humor, and poignancy about the bonds between sisters—and the challenges of everyday life.
From the Hardcover edition.

Anne-Laure Bondoux's other young adult novel is The Killer's Tears. She lives in Paris, France.
From the Hardcover edition.

1
I watch Patty as she chews her gum. Her mouth opens, closes, distorts. In the silent apartment, the spongy noise of her mastication marks the passing of time like the ticktock of a clock.

Patty is seated on the couch, one leg under her, the other on the coffee table. She's using the headset to watch TV, so as not to disturb me, and waiting for her nail polish to dry. The bottle is on the table, near her Laguna Blue-painted toenails. Patty never applies red like everyone else. It's too tacky, she says. Anyway, Patty hardly does anything like everyone else.

From my seat, I can't see the TV screen. What can she be watching at this time of the afternoon? I try to detect a clue from her face, a sign that will help me guess whether it's a hilarious comedy or a documentary about the Ming dynasty in ancient China, but Patty's face remains inscrutable. The earrings dangling from her many piercings jingle with each movement of her jaw. Ticktock, clink, clink. Patty is a fascinating machine. What is she thinking about? Is she even thinking about anything?

Sometimes I wonder if Patty doesn't suffer from brain atrophy.

I stretch, trying to shake off my musings, and go back to my studies. On the kitchen table, my books and notes are all jumbled. Note No. 21: "The First World War, the opposing forces. In the summer of 1914, 170 Allied divisions against 150 Austro-Hungarian divisions."

"In Germany, the kaiser tells his troops: 'You'll be back before the leaves start to fall.' "

I nibble on my pen. How does it feel to go to war? I imagine the platform of a railroad station, the jostle of men wearing brand-new uniforms, the train leaving as if to take them on vacation by the seaside, except that this time, waiting for them at the end of the line are the mud of the trenches, the rats, the hidden enemy, and death.

Patty bursts a third bubble. It gets on my nerves, but I don't complain: better to endure bursting chewing-gum bubbles than exploding bombs.

Come on, Mado, stop daydreaming, I tell myself. All you need to know are dates, names, numbers. Try to concentrate!

The high school final exams are four days away, and I cannot afford to mess up. The family court judge made it very clear that my success in school was crucial. A sine qua non condition. If I fail, everything will be put in question again: my life with Patty, the apartment, vacations, the very foundation of our arrangement. Eight months ago, during our last interview, the judge didn't mince words. "The guardian's responsibility is a serious and difficult one," he explained to Patty. "You'll have to help your sister as much as possible, keep an eye on her report cards, be aware of her curriculum, spare her any stress, and make sure that she gets enough sleep. If Mado misbehaves, the legal responsibility is yours. At the slightest digression, the guardianship may be reconsidered." Patty nodded and signed all the necessary papers. Then she offered the judge a piece of gum to "celebrate." He took it, but by the way he sighed, I understood that he wasn't totally confident about our arrangement. I smiled at him encouragingly. My sister might not have looked like the ideal court-appointed adult, I wanted to tell him, but we were going to show him that we were able to keep our end of the agreement. Word of Yazinsky!

Still, Patty is Patty. No one will change her.

Over these last eight months, my sister has lived with the notion that everything is fine, that she can let me be. She goes out at night, invites friends every weekend, buys clothes and makeup just as before. She never gives me any orders or advice. As for my report cards, she simply signs them. "Mado has always been a good student," she says regularly to the social worker. "Not to worry." Listening to her, you'd believe that life is happy, easy, and worry-free.

I don't resent her attitude. Patty manages as best she can. She works hard, earns enough money to feed us, and takes me to the movies whenever I ask. She'll never replace Dad and Mom, but she is my sister. My big sister.

"By the way, Mado," she says suddenly, her voice loud because of the headset over her ears. "I told you I wouldn't be here this weekend, didn't I?"

I look up and raise my eyebrows. "No, you didn't mention it."

She removes the headset and puts it down on the open crossword magazine next to her.

"It's Luigi. He's taking me to Amsterdam."

I shake my head. It's been a while since I heard about Luigi.

"What are you going to do over there?"

"What do you think?" Patty sighs as she turns off the TV. "It's a romantic trip, that's all."

I smile knowingly and quickly go back to my notes.

I can hear her blow on her toes to dry off the nail polish.

I swallow with difficulty. I don't want to get involved in Patty's love life. She's twenty years old, I'm fifteen, and I know we live on different planets. As for Luigi, I've seen him three or four times, which is plenty. He's ugly, stupid, and dirty.

"Never mind!" says Patty. "You're entitled to your opinion. You're not the one going to Holland anyway. Besides, you have to study. No chance of you getting bored."

"Is the exam on Wednesday?"

My lips tighten, and suddenly I feel terribly sad. It's true that time goes by quickly . . . even when you believe that it has stopped forever.

It's already almost nine months since the accident. Nine months ago, in October . . . the month when "the leaves start to fall," as the kaiser would say. Dad and Mom had decided to take a week's vacation outside the crowded summer holidays. They were headed to our country house in Ardeche. On a winding county road, going down a steep slope, the car brakes failed.

I give a start. Patty is standing in front of me, looking worried.

She accepts the lie willingly, relieved not to have to talk about "it." Yet she's not duped. She saw my fixed gaze, my wet eyes. She knows very well that I was thinking about them.

"Are you scared?" she asks, pointing to my notes.

She expresses this platitude with such awkward tenderness that it almost breaks all my internal levees. We change the subject quickly before the sobs start up, before we get carried away by the tide of our grief.

"Come on, snap out of it, Mado!" she says in a falsely playful voice. "Let's have dinner at Lolo's."

I try to smile. Patty and I have about as much in common as a turtle and a baboon, but I like her all the same. With her gaudy nail polish, her ear piercings, her bleached and ungroomed hair, her crossword puzzles, her dilapidated jeans, and her Luigi . . . Patty is my sister, my legal guardian, my only family, my life buoy.
From the Hardcover edition.

Book Description Random House Children's Books. Library Binding. Condition: Very Good. A copy that has been read, but remains in excellent condition. Pages are intact and are not marred by notes or highlighting, but may contain a neat previous owner name. The spine remains undamaged. An ex-library book and may have standard library stamps and/or stickers. At ThriftBooks, our motto is: Read More, Spend Less. Seller Inventory # G038590391XI4N10

Book Description Delacorte Books for Young Readers, 2007. Condition: Good. A+ Customer service! Satisfaction Guaranteed! Book is in Used-Good condition. Pages and cover are clean and intact. Used items may not include supplementary materials such as CDs or access codes. May show signs of minor shelf wear and contain limited notes and highlighting. Seller Inventory # 038590391X-2-4