Items related to Life Is Fine 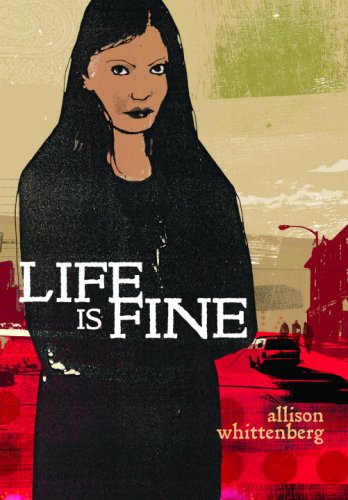 Life is not fine for Samara Tuttle, but she’s coping. Her overworked mother is distant and cold, and her mother’s boyfriend, Q, attacks Samara when she tries to clean up after his lazy, Funyun-loving self. Samara’s a loner. But all of this changes when Mr. Halbrook arrives at school. Samara’s English teacher takes ill, and in steps Mr. Jerome Halbrook, a suitwearing, blue-eyed African American man who uses Marvell’s “To His Coy Mistress” to inspire a spirited discussion about poetry, love, and truth. Soon Samara is borrowing his collections of poetry, and then she can’t stop thinking about Mr. Halbrook. Soon Samara is confiding in him about her less-than-fine past, and dreaming of a different future. But when Mr. Halbrook disappears–and it appears that he may not be all that he seemed–will she be able to picture a future without him?
From the Hardcover edition.

Allison Whittenberg lives in Philadelphia, Pennsylvania. Her first novel, Sweet Thang, was a New York Public Library Best Book for the Teen Age and a CCBC Choice for 2007.
From the Hardcover edition.

There comes a point in every relationship when verbal communication becomes unnecessary. For us, the connection was something that grew over time, but looking back, there were early clues. The first time I saw him, our eyes met and locked, and the air was charged with electricity. I didn't even notice the glass between us.
I had been seeing him for about a year now, often skipping school to get to him before visiting hours were up. His name was Dru. He was short (only five feet), but he had long, thin arms and large, powerful hands. But his eyes were what hooked me. They were hooded and on the small side, but dreamily deep-set. I knew he'd be happier out of captivity. He'd be pleased living up in a tree, hoot-barking in his natural element in Indonesia. Instead, like me, he'd been born in Philadelphia.
Dru still lived with his mom. On this particular day, she was farther back in the cell and, as usual, left us alone.

He talked to me with those eyes, those hooded eyes.

Dru was an ape. I'm not speaking metaphorically. I'm referring to his burnt-orange hair and his simian heritage.

But I'm kind of an animal, too. A chameleon. I blend into the scenery. I have to. I hate attention. At school, the popular girls wear barn red lipstick and low-slung jeans. I'm always more bundled and layered than the weather dictates. I think of it as protection. My black hair hangs straight, parted down the middle and curled in just a little at the bone of my chin. I wear black or brown pants with black or brown shirts.

The announcement came on saying that time was up.

Dru and I bade our visual farewells.

The gold October sun was high as I ducked out of the primate center. I bypassed the fruit bat and the flamingo. I overlooked the Komodo dragon and the kookaburra.
Outside the zoo, the world churned and bubbled with agitation. It was rush hour. The bus stop was crowded with people. A group of girls swayed to the beat coming from a boom box. An older woman read a dog-eared Bible.

"Damn, why you looking so evil?" A nearby toothless man tried to make me smile.
But he only made me frown more. I hate to act on demand.

I had a window seat. Around Girard Avenue, I looked out and saw a man peeing on a tree. He was ordinary otherwise, a young man in a sweatshirt and blue jeans. The city has a way of being so public it's private. Maybe he thought he was in the seclusion of his bathroom. Or maybe he just couldn't hold it and didn't want to have to pay. A lot of stores won't let you use their facilities if you don't buy something first.

The bus let me off four blocks from my house. There were For Sale signs all over my neighborhood. None of the houses were particularly big, so they weren't much to take care of. Yet they had gotten shabbier and shabbier as the years melted on. Grids of black metal bars over the windows and doors were their only home improvements.

Paint peeled and no one repainted. Shutters and shingles fell and no one replaced them. Then in came these outsiders, and they bought the houses for a song.
Drug dealers cooperated with this buyout and kindly moved their business elsewhere.

When I got to my house, I lit a cigarette and inhaled deeply. I hunched in the doorway before entering. I had to mentally prepare myself to go inside. When I did, CD cases snapped under my feet. Magazines, junk mail, various sections of the newspaper, and stacks of catalogs were all over the floor of the living room. There were crumbs on the end tables and scuffs on the wall. The banister needed painting.
I would go days without seeing or hearing from my mom. On average, she worked sixty hours a week. As a consolation prize, I got Q.

A grown man named after a letter.

He was eight years younger than my mom and eight years older than me. He was how Mom got her groove back.

But I'd been po'd at Q for the past two years. Mom had known him for only seven weeks before he came moving on in. (Great example, Mom.)
Now he rested on the couch with his cotton-socked feet on the coffee table. Why wear shoes? Where did he have to go?

As far as I could tell, he was not trained in anything. My mom was his only means of support.

He would lie on the couch, snacking on pork rinds and Mountain Dew. The way Q snacked, he should have weighed three thousand pounds. Instead, he was wiry like a worm.

He had a daughter somewhere I had heard him mention once or twice. I think she was five or six. Anyway, he never visited her.

They say it's nice to have a man around the house. Yet the last time there was a power outage, I was the one standing on a stepladder fiddling with the circuit breaker.

The TV blared Judge Mathis. Q looked up at me icily. I glared back at him. We'd gotten out of the habit of speaking to each other a long time ago.
I hated him.

He didn't contribute to the household but easily got more use out of the place than either Mom or I. He was always watching cable TV or opening the refrigerator door. He was really icky to look at. He had large pores and more acne than most people my age. But it wasn't his downright homeliness I resented. I hated his thereness.
Mom didn't care how much I disliked Q. She had her own life to lead, as she told me on the occasions when I spoke with her.

I didn't know my father. I believed I should, for medical history if nothing else. The old saying wasn't true. Ignorance wasn't bliss.
Maybe my somewhere father didn't know I existed. Maybe that was why he never contacted me with a phone call or a postcard or an e-mail. By land, air, or sea.
I'd been up against Q for the past two years. And before Q, there was someone worse.

Sometimes I imagined I came from a loving family. A biscuit-baking mom, a nine-to-five wage-slave father, and two sisters, one younger and one older. Or maybe they could both be younger, but not by too much of a gap. This imaginary family included a dog, a collie named Schulley. Each afternoon, my mom and dad would ask me about my day. I'd blow them off because I needed my space.

"Honey, are you upset about something? Do you want to talk about it?" my pretend mom would say.

"I'm busy," I'd call over my shoulder, closing the bedroom door behind me. As for my two sisters (let's call them Claudia and Denise), they loved me so much they were always hanging out in my room, but who had time for them? I'd be dating a cool-as-hell dropout. I'd ride on the back of his motorcycle and clutch him like a caterpillar.

Instead of being met by my ideal family, that evening, like so many others, I was stuck heating a frozen burrito at dinnertime for my one-thousandth meal alone.
Life was really something. I often thought maybe I should read one of those self-help books. With assisted knowledge, I might easily conclude that the first fifteen years of my life were crap, but maybe, just maybe, the next fifteen years would be better.
I needed a thing, something to lean on. I felt like abusing a drug, but I didn't know which. Or developing an eating disorder, but I didn't know how. Being in love with an orangutan was the only monkey on my back.

I figured I could up my smoking habit. I pinched cigarettes from my mom. If she noticed, she never said.

Another year down the toilet.

I hated my life in this cluttered, hollow house. I should have had my own life, but I didn't. All I had was Dru, an orangutan. That was it.
From the Hardcover edition.