Items related to The Alphabet and the Brain: The Lateralization of Writing

De Kerckhove, Derrick The Alphabet and the Brain: The Lateralization of Writing

The Alphabet and the Brain: The Lateralization of Writing 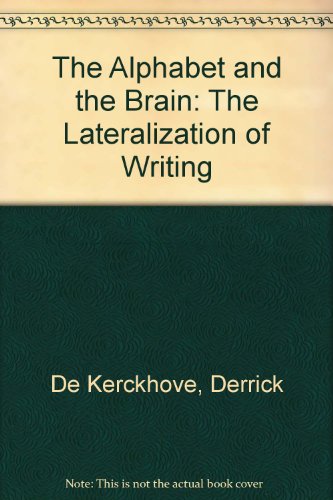 This book is a consequence of the suggestion that a major key to­ ward understanding cognition in any advanced culture is to be found in the relationships between processing orthographies, lan­ guage, and thought. In this book, the contributors attempt to take only the first step, namely to ascertain that there are reliable con­ stancies among the interactions between a given type of writing and specific brain processes. And, among the possible brain processes that could be investigated, only one apparently simple issue is being explored: namely, whether the lateralization of reading and writing to the right in fully phonemic alphabets is the result of formalized but essentially random occurrences, or whether some physiological determinants are at play. The original project was much more complicated. It began with Derrick de Kerckhove's attempt to establish a connection between the rise of the alphabetic culture in Athens and the development of a theatrical tradition in that city from around the end of the 6th century B. c. to the Roman conquest. The underlying assumption, first proposed in a conversation with Marshall McLuhan, was that the Greek alphabet was responsible for a fundamental change in the psychology of the Athenians and that the creation of the great tragedies of Greek theatre was a kind of cultural response to a con­ dition of deep psychological crisis.