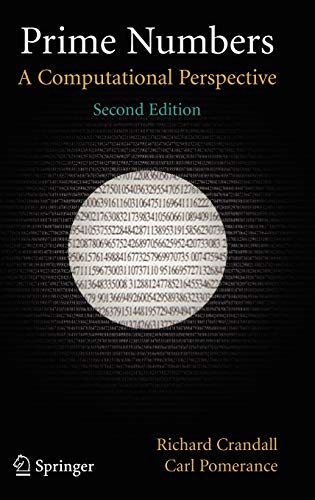 Bridges the gap between theoretical and computational aspects of prime numbers

Exercise sections are a goldmine of interesting examples, pointers to the literature and potential research projects

Authors are well-known and highly-regarded in the field

Prime numbers beckon to the beginner, as the basic notion of primality is accessible even to children. Yet, some of the simplest questions about primes have confounded humankind for millennia. In the new edition of this highly successful book, Richard Crandall and Carl Pomerance have provided updated material on theoretical, computational, and algorithmic fronts. New results discussed include the AKS test for recognizing primes, computational evidence for the Riemann hypothesis, a fast binary algorithm for the greatest common divisor, nonuniform fast Fourier transforms, and more. The authors also list new computational records and survey new developments in the theory of prime numbers, including the magnificent proof that there are arbitrarily long arithmetic progressions of primes, and the final resolution of the Catalan problem. Numerous exercises have been added.

Richard Crandall currently holds the title of Apple Distinguished Scientist, having previously been Apple's Chief Cryptographer, the Chief Scientist at NeXT, Inc., and recipient of the Vollum Chair of Science at Reed College. Though he publishes in quantum physics, biology, mathematics, and chemistry, and holds various engineering patents, his primary interest is interdisciplinary scientific computation. Carl Pomerance is the recipient of the Chauvenet and Conant Prizes for expository mathematical writing. He is currently a mathematics professor at Dartmouth College, having previously been at the University of Georgia and Bell Labs. A popular lecturer, he is well known for his research in computational number theory, his efforts having produced important algorithms now in use.

From the reviews of the first edition:

"Destined to become a definitive textbook conveying the most modern computational ideas about prime numbers and factoring, this book will stand as an excellent reference for this kind of computation, and thus be of interest to both educators and researchers."

"...Prime Numbers is a welcome addition to the literature of number theory---comprehensive, up-to-date and written with style."

"It's rare to say this of a math book, but open Prime Numbers to a random page and it's hard to put down. Crandall and Pomerance have written a terrific book."

- Bulletin of the AMS

Richard Crandall currently holds the title of Apple Distinguished Scientist, having previously been Apples Chief Cryptographer, the Chief Scientist at NeXT, Inc., and recipient of the Vollum Chair of Science at Reed College. His primary interest is interdisciplinary scientific computation, though he has authored numerous theoretical papers in quantum physics, biology, mathematics, and chemistry, as well as various patents across engineering fields.

Carl Pomerance received his Ph.D. in mathematics from Harvard University in 1972. Currently he is a professor at Dartmouth College. A popular lecturer and winner of the Chauvenet and Conant Prizes for expository mathematical writing, Pomerance is well known for his research in computational number theory, his efforts having produced important algorithms now in wide use.