W. Hollik; R. Ruckl Phenomenological Aspects of Supersymmetry: Proceedings of a Series of Seminars Held at the Max-Planck-Institu Fur Physik Munich, Frg, May to November (Lecture Notes in Physics)

Phenomenological Aspects of Supersymmetry: Proceedings of a Series of Seminars Held at the Max-Planck-Institu Fur Physik Munich, Frg, May to November (Lecture Notes in Physics) 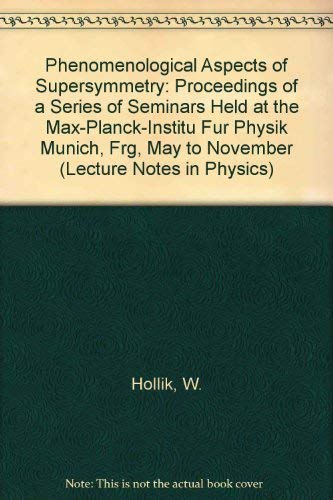 Although the Standard Model of strong and electroweak interactions describesparticle physics phenomena up to the vector boson mass scale very well, it is in general believed that it is not the ultimate theory. The aim of this series of seminars was to initiate discussions between field theorists and phenomenologically oriented high energy physicists on the observable consequenses of the concept of SUSY. The subjects covered by the individual contributions include an introduction to the basic features of SUSY models, in particular the minimal supersymmetric Standard Model, followed by discussions of the theoretical predictions and experimental findings on the particle content and mass spectra, cosmological consequenses, indirect manifestations through quantum effects, radiative corrections in the supersymmetric Higgs sector, and the concept of dynamical electroweak symmetry breaking in the context ofSUSY. These topics are treated at a level appropriate for advanced students.However, the book should also be useful for teachers and researchers.