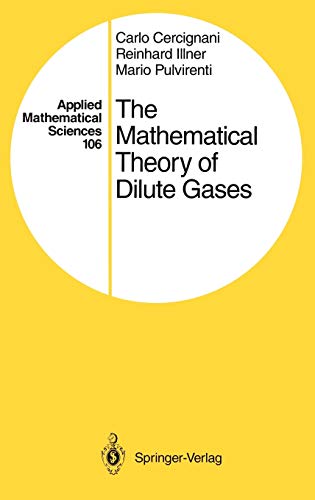 The idea for this book was conceived by the authors some time in 1988, and a first outline of the manuscript was drawn up during a summer school on mathematical physics held in Ravello in September 1988, where all three of us were present as lecturers or organizers. The project was in some sense inherited from our friend Marvin Shinbrot, who had planned a book about recent progress for the Boltzmann equation, but, due to his untimely death in 1987, never got to do it. When we drew up the first outline, we could not anticipate how long the actual writing would stretch out. Our ambitions were high: We wanted to cover the modern mathematical theory of the Boltzmann equation, with rigorous proofs, in a complete and readable volume. As the years progressed, we withdrew to some degree from this first ambition- there was just too much material, too scattered, sometimes incomplete, sometimes not rigor­ ous enough. However, in the writing process itself, the need for the book became ever more apparent. The last twenty years have seen an amazing number of significant results in the field, many of them published in incom­ plete form, sometimes in obscure places, and sometimes without technical details. We made it our objective to collect these results, classify them, and present them as best we could. The choice of topics remains, of course, subjective.

"...this is a volume that will repay close study by those who wish to catch up with the present state of the art in the mathematical theory of dilute gases." - Journal of Fluid Mechanics

1. THE MATHEMATICAL THEORY OF DILUT