Items related to Deterrence and Juvenile Crime: Results from a National...

Deterrence and Juvenile Crime: Results from a National Policy Experiment (Research in Criminology) 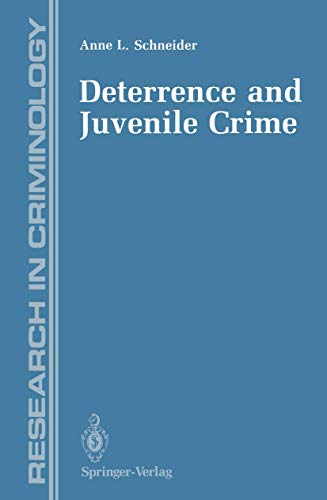 "Americans have an abiding faith in punishment", asserts Anne Schneider in her introduction of Deterrence and Juvenile Crime. Dr. Schneider explores this "abiding faith" in her volume, overviewing past assumptions that punishment or merely the threat of punishment necessarily deters criminal behavior. She critically examines specific deterrence theories and presents the methodology used in her own research - research whose findings are often quite disruptive to those assumptions held so long. Using data from six experimental studies in U.S. cities, she finds that instilling a sense of citizenship is more important in reducing future criminal behavior than enhancing the certainty or severity of punishment. Beyond these results, the author raises some pointed issues to explain why perceptions of certainty and severity of punishment generally perform so inadequately in predicting subsequent offenses. A comparison between incarceration methods and community-based restitution programs, as well as the implications of policy, comprise a thorough discussion which focuses on the future and reflects upon the role of random experiments regarding issues of public policy initiatives.

2. Deterrence and Juvenile Crime: Results from a National Policy Experiment (Research in Criminology)