Items related to Introduction to Mathematical Systems Theory: A Behavioral... 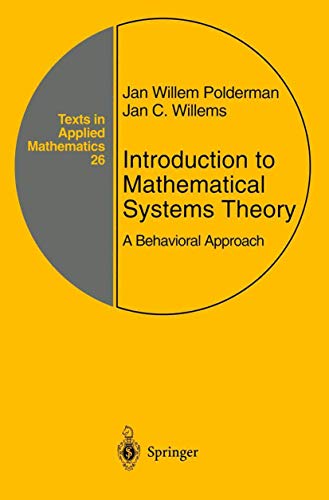 Using the behavioural approach to mathematical modelling, this book views a system as a dynamical relation between manifest and latent variables. The emphasis is on dynamical systems that are represented by systems of linear constant coefficients. The first part analyses the structure of the set of trajectories generated by such dynamical systems, and derives the conditions for two systems of differential equations to be equivalent in the sense that they define the same behaviour. In addition the memory structure of the system is analysed through state space models. The second part of the book is devoted to a number of important system properties, notably controllability, observability, and stability. In the third part, control problems are considered, in particular stabilisation and pole placement questions. Suitable for advanced undergraduate or beginning graduate students in mathematics and engineering, this text contains numerous exercises, including simulation problems, and examples, notably of mechanical systems and electrical circuits.

"The present book is a major original contribution to the literature and is of high quality. The most original chapters are the ‘strongly behavioural’ Chapters 1-6 and the historical preface. The introduction is carefully written and each chapter ends with a precise recapitulation of what has been done. It is well organized, technically well written, philosophically nice, and contains a wealth of examples and exercises. It is also well self-contained for its audience...scientific honesty dictates to congratulate the authors and to recommend this book as a textbook to a large public of systems and control students, and especially for those having already followed a first course on linear systems."

Buy Used
Condition: Good
Volume 26. This is an ex-library... Learn more about this copy

Book Description Springer, 1998. Condition: Good. Volume 26. This is an ex-library book and may have the usual library/used-book markings inside.This book has hardback covers. With usual stamps and markings, In good all round condition. No dust jacket. Please note the Image in this listing is a stock photo and may not match the covers of the actual item,800grams, ISBN:9780387982663. Seller Inventory # 8181386

Book Description Springer, 1997. Condition: Good. This is an ex-library book and may have the usual library/used-book markings inside.This book has hardback covers. In good all round condition. No dust jacket. Seller Inventory # 8264202

Book Description Springer, 1997. Condition: Good. A+ Customer service! Satisfaction Guaranteed! Book is in Used-Good condition. Pages and cover are clean and intact. Used items may not include supplementary materials such as CDs or access codes. May show signs of minor shelf wear and contain limited notes and highlighting. Seller Inventory # 0387982663-2-4