Items related to The Spanish Ulcer: A History of the Peninsular War

Gates, David The Spanish Ulcer: A History of the Peninsular War

The Spanish Ulcer: A History of the Peninsular War 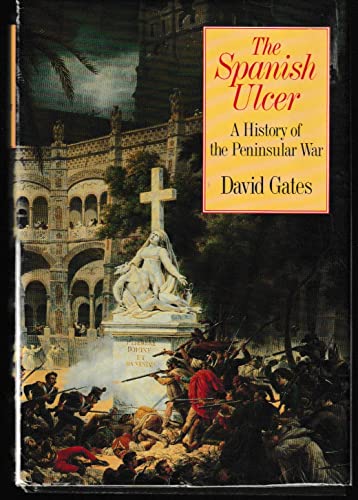 This study assesses the opposing generals and their troops and analyzes the social and political background of the war that ranged Spanish regulars and guerrillas, the Portuguese, and British forces led by Sir John More and the Duke of Wellington againstNapoleon's forces

Dr David Gates is Lecturer at the Centre for Defence Studies, University of Aberdeen, and the leading British scholar on the Napoleonic Wars.

In 1808, on the Iberian peninsula, Napoleon began a six-year war of attrition against Spain and its British and Portuguese allies. Expecting a quick victory, the French emperor instead found himself facing a strong foe (led by Britain's Duke of Wellington), including popular opposition in the form of guerrilla bands, and constant supply and communications problems. In this thorough military history, Gates, a university lecturer in Scotland, offers a battle-by-battle account of the war in its various theaters, with maps and other illustrations. His descriptions of the brutal fighting on barren terrain are clear and balanced, making this a valuable modern view of the conflict. He likens the "Spanish Ulcer," as the ultimately devastating defeat of Napoleon was called, to the present-day Soviet attempt to impose rule against the popular will in Afghanistan. History Book Club selection.
Copyright 1986 Reed Business Information, Inc.

1. The Spanish Ulcer: A History of the Peninsular War