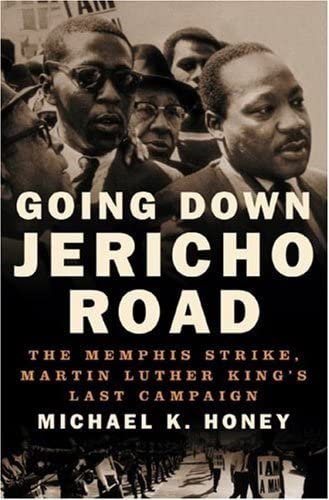 Memphis in 1968 was ruled by a paternalistic "plantation mentality" embodied in its good-old-boy mayor, Henry Loeb. Wretched conditions, abusive white supervisors, poor education, and low wages locked most black workers into poverty. Then two sanitation workers were chewed up like garbage in the back of a faulty truck, igniting a public employee strike that brought to a boil long-simmering issues of racial injustice.

With novelistic drama and rich scholarly detail, Michael Honey brings to life the magnetic characters who clashed on the Memphis battlefield: stalwart black workers; fiery black ministers; volatile, young, black-power advocates; idealistic organizers and tough-talking unionists; the first black members of the Memphis city council; the white upper crust who sought to prevent change or conflagration; and, finally, the magisterial Martin Luther King Jr., undertaking a Poor People's Campaign at the crossroads of his life, vilified as a subversive, hounded by the FBI, and seeing in the working poor of Memphis his hopes for a better America. 16 pages of illustrations

Michael K. Honey, a former Southern civil rights and civil liberties organizer, is Haley Professor of Humanities at the University of Washington Tacoma, where he teaches labor, ethnic, and gender studies and American history. He is a Guggenheim Fellow and has won numerous research fellowships and book awards for his books on labor, race relations, and civil rights history, including the Robert F. Kennedy Book Award for Going Down Jericho Road. He lives in Tacoma with his wife, Pat Krueger.

Reviewed by Kevin Boyle By the early months of 1968, Martin Luther King Jr.'s public ministry was in free fall. The great moral power he had unleashed in Birmingham and Selma, Ala. -- the nation made anew by peaceful protest -- had given way to a sickening cycle of violence: white terrorism in the South, black rioting in the North, war in Vietnam. As the brutality accelerated, King himself came under repeated attack. Advocates of Black Power dismissed him as too moderate. Many whites, angered by his criticism of Northern segregation and his opposition to the war in Southeast Asia, condemned him as too radical. Even some of his longstanding supporters wondered whether his campaigns on behalf of the dispossessed had become quixotic.

Then King went to Memphis.

In Going Down Jericho Road, Michael K. Honey painstakingly recreates the explosive situation King stepped into. On Feb. 12, 1968, Memphis's 1,300 sanitation workers, almost all of them African American, went on strike. They didn't ask for much: recognition of their union, the American Federation of State, County and Municipal Employees; an agreement that the city would withhold union dues from workers' paychecks; a small pay raise; and improved safety standards. But for men who had always lived under the crushing weight of white supremacy, even such simple demands represented an exhilarating assertion of human rights. By walking off their jobs, the strikers were laying claim to the dignity and justice long denied them.

Memphis's conservative mayor, Henry Loeb, understood precisely what was happening. So he refused to negotiate. With the strike deadlocked, workers and their supporters took their protests to the streets. The city met mass marches with mass arrests. Repression triggered talk of armed resistance and sporadic acts of violence, much of it caused by young militants in the thrall of Black Power. By the time King arrived in Memphis on March 18, the sanitation strike had turned into a battle for the city's soul.

Honey devotes the second half of Going Down Jericho Road to King's month-long engagement with the strikers' struggle. A former union organizer turned labor historian at the University of Washington, Tacoma, Honey has a sure feel for the idealism that surged through the strike that spring. King's willingness to stand by the sanitation workers reinforced the sense of personal empowerment expressed on the strikers' picket signs. "I Am A Man," their slogan read. But the strike meant something to King as well, Honey says, something fundamentally important. He came to Memphis as a favor to local ministers, who hoped his presence would force the mayor to begin bargaining. He found there the makings of a new mass movement that pushed beyond civil rights to demand economic justice for the most marginal of Americans. With that vision before him, King rekindled the grand hopes that even he had felt slipping away.

Then the movement took an ugly turn. On March 28, King tried to lead some 10,000 marchers on a peaceful protest through downtown Memphis. But he couldn't control the teenagers at the tail end of the march, who started shattering shop windows. Looters grabbed whatever they could, the police attacked, and within moments King found himself in the midst of a riot. The incident turned into a public relations nightmare: The next day politicians, newspapers and television outlets across the country assailed the prophet of nonviolent resistance for loosing anarchy in the streets.

Worse was yet to come. King's advisers urged him to abandon the strike, but he knew that was impossible. "The Movement," he told them, "lives or dies in Memphis." After a week's respite from the city, King returned to Memphis on April 3 to solidify plans for yet another march. The following afternoon, while he was standing on the balcony of the Lorraine Motel, he was shot in the head. As news of the murder spread, rioting swept across 125 cities. By week's end, 43 Americans had been killed and 20,000 arrested in the most fearsome wave of domestic disorder since the Civil War.

Though Honey recounts these events in chilling detail, he refuses to cast the strike in tragic tones. While the nation's inner cities burned, Memphis's sanitation workers remained peaceful, as King would have wanted them to be. Their resolve -- and intense national pressure -- forced Mayor Loeb finally to settle the dispute largely on the strikers' terms. But it was the struggle itself that really mattered, Honey contends, "because it opened people's eyes to the injustices of poverty and racism, and it gave them hope for a different world." That's an admirable sentiment. But it's hard to read Going Down Jericho Road without reaching the opposite conclusion. In Memphis, it wasn't hope that triumphed. It was brutal, bloody violence.