Items related to Sphere the Form of a Motion

Ammons, A. R. Sphere the Form of a Motion

Sphere the Form of a Motion 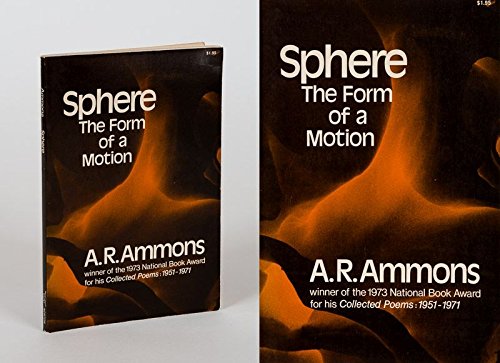 Sphere is the second of A.R. Ammons's long poems--following Tape for the Turn of the Year and preceding Garbage--that mark him as a master of this particular form. The sphere in question is the Earth itself, and Ammons's wonderfully stocked mind roams globally, ruminating on subjects that range from galaxies to gas stations. It is a remarkable achievement, comparable in importance to Wallace Steven's Notes Toward a Supreme Fiction.

A. R. Ammons’s (1926–2001) was a two-time winner of the National Book Award and the recipient of a National Book Critics Circle Award. His many additional honors include the Academy of American Poets’ Wallace Stevens Award, the Bollingen Prize, the Poetry Society of America’s Robert Frost Medal, the Ruth Lilly Prize, and fellowships from the Guggenheim and MacArthur Foundations.