Items related to Nixon's Shadow: The History of an Image

Greenberg, David Nixon's Shadow: The History of an Image

Nixon's Shadow: The History of an Image 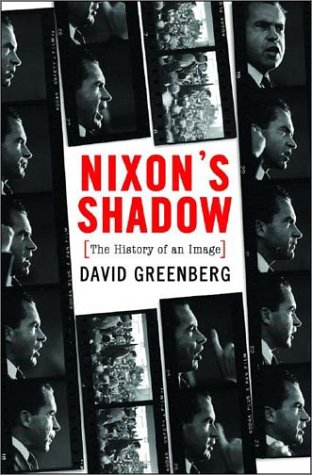 Looks at different images of and perspectives on Richard Nixon that were created and disseminated in American culture and explains how these images have transformed the way in which Americans view politics and politicians.

David Greenberg, a historian, teaches at Yale University and is a columnist for Slate. Formerly Acting Editor of The New Republic, he has written for scholarly and popular publications including The Atlantic, Foreign Affairs, The New York Times and The Washington Post. He earned his BA from Yale and his PhD from Columbia University, where Nixon’s Shadow won the Bancroft Dissertation Prize, for a work of originality, scholarly importance and literary merit.

In this aptly named study, Greenberg, a Bancroft Prize winner who also collaborated with Bob Woodward on The Agenda, sedulously avoids value judgments about the effectiveness of Richard Nixon's policies, offering instead a kaleidoscopic view of the man's many images: as Tricky Dick, as conspirator, as victim, as statesman, among others. Borrowing Woodward's device of calibrating his subjects through the eyes of others, Greenberg presents the opinions of Nixon loyalists, Nixon haters, pundits from the left and right, mainstream historians, revisionist historians, psychobiographers, the Washington press corps and members of the foreign policy establishment. According to Greenberg, this retrospective shows Nixon to have been the first postmodern president, the first whose image was purposefully manipulated for political reasons and without regard to accomplishments. The author also argues that the key to understanding Nixon is not in "discarding the many images of him... but [in] gathering and assembling them into a strange, irregular, mosaic." But with an impressive number of viewpoints sampled, hundreds of sources quoted and even TV shows Laugh-In and Saturday Night Live plumbed for Nixon references, readers may find the citations overwhelming. Still, for sheer drama, Nixon's career remains worthy of review, from his red-baiting 1950 Senate campaign against Helen Gahagan Douglas, his involvement in the Alger Hiss perjury case and the infamous "Checkers" speech to the Khrushchev kitchen debate, his China policy and the political drama of the century, Watergate. Greenberg's thoroughly researched book, despite its faults, brightly illuminates the passionate public responses that swirled around one of the most controversial politicians of our times. 16 pages of photos not seen by PW.
Copyright 2003 Reed Business Information, Inc.

1. Nixon's Shadow: The History of an Image

2. Nixon's Shadow: The History of an Image

3. Nixon's Shadow: The History of an Image

4. Nixon's Shadow: The History of an Image

5. NIXON'S SHADOW: THE HISTORY OF A