Items related to The Making of a Poem: A Norton Anthology of Poetic...

The Making of a Poem: A Norton Anthology of Poetic Forms

The Making of a Poem: A Norton Anthology of Poetic Forms 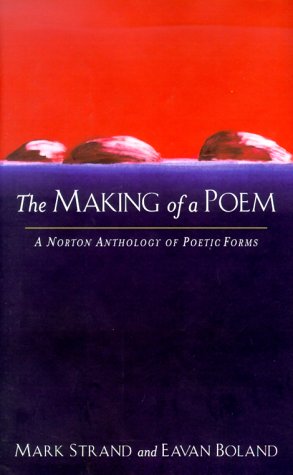 Two beloved and esteemed poets have collaborated on this intimate and useful anthology illuminating the history, practice, and wonder of our most elusive art. Intended for all those who love poetry, including teachers, readers, writers, and students, The Making of a Poem will be especially valued by those who feel that an understanding of form--sonnet, ballad, villanelle, sestina, etc.--would enhance their appreciation of poetry, but are daunted by the terms, the names, and the histories of various poetic forms. This anthology draws the reader in, by example and explanation, to the excitement and entertainment of these forms. It explains their origins, traces their development, and shows examples from the past and present. In a feature called "The form at a glance" the reader can try his or her own hand writing a particular form. Included are essays by each of the editors describing their own personal journeys toward a form for their poetic voice. Above all, this anthology shows that poetic form is a continuing adventure. Contemporary poets can be seen here trying out the same forms that poets used hundreds of years ago, but in the new circumstances of a complicated modern world. In this way poetic form is illustrated not as a series of rules, but as a passionate conversation in which every reader of poetry can become involved.

The Making of a Poem is among the best how-to-read-poetry titles. Edited by two of our greatest living poets, one Irish and female, the other American and male, it is both an exploration of poetic forms and an anthology. Eavan Boland and Mark Strand each offer an introduction and then give us a series of chapters devoted to particular verse forms--the sonnet, the ballad, the sestina, the villanelle, blank verse, the stanza--as well as a long section devoted to what they somewhat vaguely call shaping forms. This refers to poetic structures established not by a specific rhyme and/or metrical pattern but by content: the elegy, for example, or the pastoral or ode. The book then concludes with a section on open forms. Each chapter is conveniently subdivided, each topic simply defined: a single page gives "The Ballad at a Glance" (or, for that matter, the pantoum) as a quick overview of the form's structure. A page or two on the history of the form follows, along with a brief comment on "the contemporary context." Then a chronological anthology of poems demonstrates the particular form. In the sonnet's case, for instance, we are treated to 23 brilliantly chosen examples--everything from Shakespeare's "Shall I compare thee to a summer's day?" to Seamus Heaney's "The Haw Lantern" to Mary Jo Salter's playful "Half a Double Sonnet." The section then concludes with another brief analysis of one example. In this spot, the villanelle features Elizabeth Bishop's classic heartbreaker, "One Art," and blank verse gives us far too brief a take on Robert Frost's tantalizing "Directive." Itself worth the price of admission, the poem begins:


One can readily see both the advantages and the limitations of such a format: definitions are kept lean, at times approaching the sound bite, and the short sentences and brief paragraphs often seem designed for a readership more accustomed to journalism than to the complexities of Dante (see, for example, the one-page history of the sestina). All of this looks like an attempt to reach an audience of both college students and general readers. While more information might help (brief comments on why certain poems in the anthology are defined as odes, pastorals, or elegies, for example), the bottom line is that The Making of a Poem does an excellent job of taking the inexperienced reader inside the mystery of poetic form. In these terms the volume succeeds, giving us a way into the history of poetry, along with an excellent anthology as a starting point for a deeper exploration of the glories of the genre. --Doug Thorpe From the Author:

In the words of its editors, The Making of a Poem "looks squarely at some of the headaches and mysteries of poetic form." Here, two of our foremost poets provide a lucid, straightforward primer for those who have always felt that an understanding of form—sonnet, ballad, villanelle, sestina, etc.—would enhance their appreciation of poetry. By example and explanation, the anthology traces "the exuberant history of forms," a history that unites poets as diverse as John Keats and Joy Harjo (the Ode) or Geoffrey Chaucer and Jean Toomer (the Stanza). Each chapter is devoted to one form, offering explanation, close reading, and a rich selection of exemplars that amply demonstrate the power and possibility of the form.

1. The Making of a Poem: A Norton Anthology of Poetic Forms

2. The Making of a Poem: A Norton Anthology of Poetic Forms

3. The Making of a Poem: A Norton Anthology of Poetic Forms

4. The Making of a Poem: A Norton Anthology of Poetic Forms

5. The Making of a Poem: A Norton Anthology of Poetic Forms

6. Making Of A Poem Strand, Mark and Boland, Eavan