Items related to Mad, Bad, and Sad: Women and the Mind Doctors

Mad, Bad, and Sad: Women and the Mind Doctors 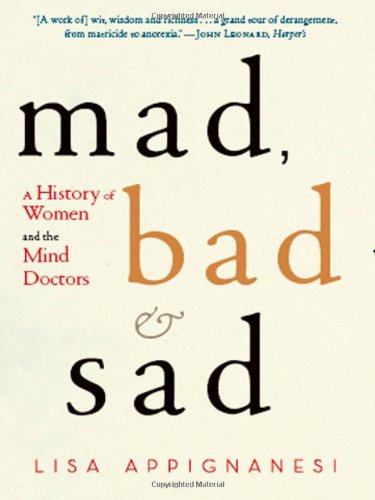 A brave and brilliantly researched intellectual history of the relationship between women and mental illness since 1800.

This is the story of how we have understood extreme states of mind over the last two hundred years and how we conceive of them today, from the depression suffered by Virginia Woolf and Sylvia Plath to the mental anguish and addictions of iconic beauties Zelda Fitzgerald and Marilyn Monroe. From Mary Lamb, sister of Charles, who in the throes of a nervous breakdown turned on her mother with a kitchen knife, to Freud, Jung, and Lacan, who developed the new women-centered therapies, Lisa Appignanesi’s research traces how more and more of the inner lives and emotions of women have become a matter for medics and therapists. Here too is the story of how over the years symptoms and diagnoses have developed together to create fashions in illness and how treatments have succeeded or sometimes failed. Mad, Bad, and Sad takes us on a fascinating journey through the fragile, extraordinary human mind.

Lisa Appignanesi, is the author of Mad, Bad and Sad: A History of Women and the Mind Doctors and All About Love: Anatomy of an Unruly Emotion. A prize-winning novelist and writer, she is the president of English PEN. She lives in London.

Award-winning British novelist Appignanesi (The Memory Man) has written a fascinating if somewhat diffuse study of how, over the past two centuries, women's ability to live creative lives has been controlled by culture, and how their unsuccessful attempts to rebel frequently lead to mental illness-itself a slippery, ever-evolving cultural concept. Appignanesi's sources are wide-ranging but largely literary, based upon letters, diaries, articles and fiction from feminist writers such as Betty Friedan, historians like R.D. Laing and Jacque Lacan, psychologists such as Melanie Klein, and troubled subjects like Zelda Fitzgerald and Marilyn Monroe. Beginning with the lives of mentally ill women in the 19th century, Appignanesi moves chronologically through the history of psychology-as ideas like schizophrenia replace earlier notions of hysteria-and its relationship to the creative woman, using in-depth profiles of Virginia Woolf, Alice James and others. Looking at the complex cultural, political and familial circumstances under which mental illness emerges, and their implications for the present (in which depression and eating disorders have become major problems), Appignanesi convincingly asserts that "symptoms and diagnoses... cluster to create cultural fashions in illness and cure," suggesting provocatively that "what is at issue here is not psychic disorder so much as social deterioration of a radical kind."
Copyright © Reed Business Information, a division of Reed Elsevier Inc. All rights reserved.

1. Mad, Bad, and Sad: Women and the Mind Doctors