Items related to John the Baptizer: A Novel

John the Baptizer: A Novel 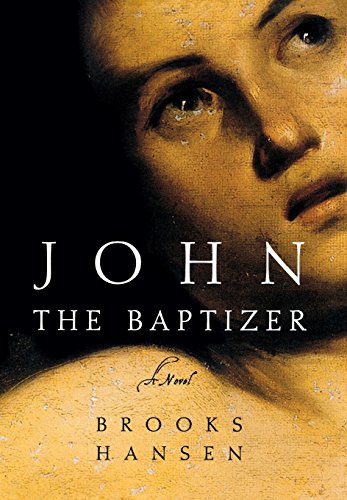 A vivid, moving, and unprecedented biographical saga of John the Baptist.

Traditionally, John the Baptist is seen as little more than an opening act―“the voice crying in the wilderness”―in the great Christian drama. In presenting the epic of John’s life, novelist Brooks Hansen draws on an extraordinary array of inspirations, from the works of Caravaggio, Bach, and Oscar Wilde to the histories of Josephus, the canonical gospels, the Gnostic gospels, and the sacred texts of those followers of John who never accepted Jesus as Messiah: the Mandeans.Gripping as literary historical fiction, and fascinating as a diligent exploration of ancient and modern sources, this book brings to eye-opening life the richly textured world―populated by the magnificently sordid, calculating, and reckless Herods, their families, and their courts―into which both John and Jesus were born. John the Baptizer is a captivating tapestry of power and dissent, ambition and self-sacrifice, worldly and otherworldly desire, faith, and doubt.

Brooks Hansen is the critically acclaimed author of The Chess Garden and, most recently, The Brotherhood of Joseph. He lives with his family in Carpinteria, California.

In fictionalizing the life of John the Baptist, Hansen (The Brotherhood of Joseph) reveals the messy humanity behind the saint. Even readers with a passing knowledge of Christianity will find John's fate laid out on the first page—his head is brought to King Herod upon a platter. Hansen's meticulously researched narrative sets John's life in a wide context, omitting little, for better or for worse: from John's childhood lessons to his emergence as a prophet and his capture and execution, readers find themselves immersed in the biblical world. The visceral descriptions of suffering, such as the death of Herod's father or the cistern in which John is held captive, bring religious figures into the gritty realm of the grotesque. Yet Hansen still retains a sense of wonder in his subjects: when John's mother gives birth after a lifetime of barrenness, or when John baptizes his Messiah-cousin, the flesh-and-blood characters step back into their familiar stained-glass poses and become larger than life. The juxtaposition of stark realism and religious loftiness has its perplexing moments, but it's precisely what will keep the pages turning. (June)
Copyright © Reed Business Information, a division of Reed Elsevier Inc. All rights reserved.

1. John the Baptizer: A Novel

3. John the Baptizer: A Novel

4. John the Baptizer: A Novel

5. John the Baptizer : A Novel

6. John the Baptizer: A Novel

7. John the Baptizer: A Novel

9. JOHN THE BAPTIZER: A NOVEL