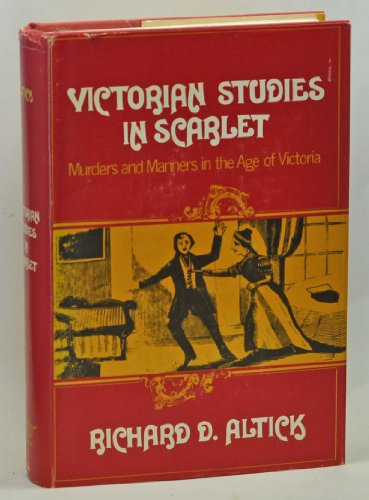 "Of course I do not wish for murders," a character in a nineteenth-century novel remarks, "but when there is one, why, I like it. It is human nature." Human nature it is indeed, and murder has always fascinated mankind. Never, however, was the absorption more tireless, never was the shudder of terror closer to enjoyment than in the Victorian era.

In the first chapters, Mr. Altick examines the Victorian delight in murder as a social phenomenon. The remainder of the book is constructed around classic murder cases that afford a vivid perspective on the way people lived--and died--in the Age of Victoria.

From the beginning of the age, homicide was a national entertainment. Penny broadsheets hawked in the streets highlighted the most gruesome features of crimes; newspapers recounted the most minute details, from the discovery of the body to the execution of the criminal. Real-life murders were quickly adapted for the gaslight melodrama and the bestselling novels of the "Newgate" and "sensation" schools. Murder scenes and celebrities were the most popular exhibits at Madame Tussaud's waxworks and in the touring peepshows and marionette entertainments.

Murder, in fact, was a crimson thread running through the whole fabric of Victorian life. By tracing this thread in "not too solemn a spirit," Mr. Altick has written a book that will delight and inform all who are interested in social history, as well as that great number who relish true murder stories.